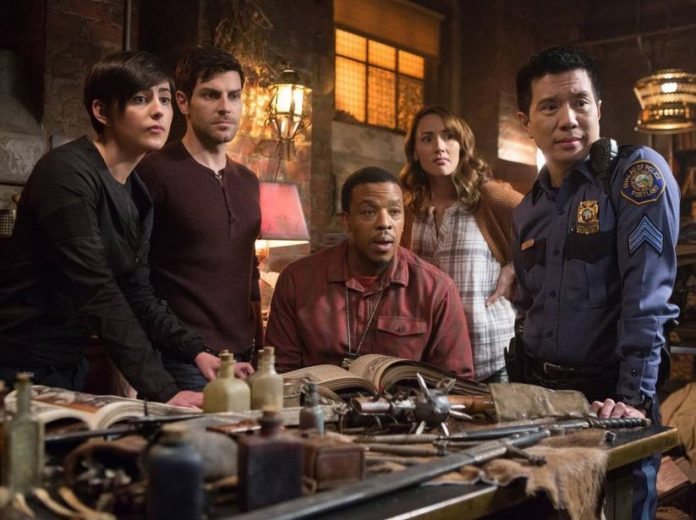 Production on the final season of “Grimm” is underway. It was a shock to fans when it was announced that the hit NBC series was ending its run after the upcoming sixth season, but the cast and crew are planning to serve a few surprises when the show returns.

It is expected that Nick (David Giuntoli) and Renard (Sasha Roiz) will face off in season 6 after the events of the finale, now that the latter has been elected as the mayor of Portland and is poised to bring to the land his own brand of law and order. But in a behind-the-scenes look at the new season, it appears that something will bring the two together as Renard works with the Scooby gang.

Claire Coffee, who plays Adalind in the show, took to Instagram on Sept. 16 to post a photo taken on the set of the series which shows Renard, Hank (Russell Hornsby), Sgt. Wu (Reggie Lee) and Nick at the loft. Coffee captioned the shot, “Ain’t no party like a loft rehearsal party.”

It appears that something bigger than Renard and Nick’s feud might have brought all of them together and it remains to be seen whether a massive supernatural occurrence or a threat to the city has made them decide to join forces again.

The season 5 finale ended on multiple shockers and cliffhangers, starting with the death of Meisner (Damien Puckler). Renard shot his former ally as Bonaparte (Shaun Toub) was suffocating him to put him out of his misery. This enraged Nick and he confronted Renard in his office. Later, Nick got arrested and Bonaparte told Nick to hand over a book of Grimm lineage so he can have his son back.

Eve (Bitsie Tulloch) and the rest of the Scooby gang went to the precinct and a shootout followed. Eve got shot, and Nick used the magic stick to heal her. Later, it appeared that the stick had a peculiar effect on her as Juliette began to resurface in Eve’s psyche. The episode ended with Rosalee (Bree Turner) telling Monroe (Silas Weir Mitchell) that she’s pregnant, while Nick and Renard stared at each other after Diana (Hannah R. Loyd) killed Bonaparte with her powers.

It was announced last month that “Grimm” will be taking its final bow after its 13-episode run next year. Fans have started online campaigns to save the show, with one Change.org petition calling for Netflix to renew the show for a seventh season.

'Switched at Birth' season 5 premiere date revealed: what to expect