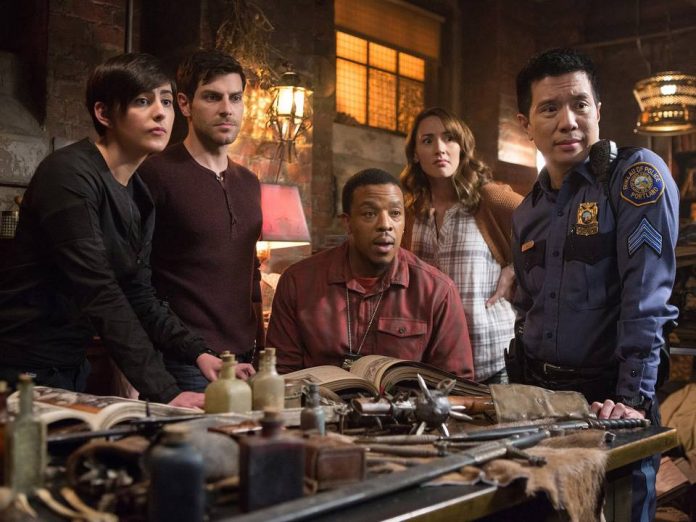 The upcoming season 6 of NBC’s supernatural series “Grimm” will see the monster hunters scrambling to find a safe place after their usual dwellings were burnt in the last installment’s finale.

Talking to Enstars, lead star David Giuntoli who portrays Nick Burkhardt revealed that, “It picks up the millisecond we left off; the micro-moment. We’re all on the run. Renard [Sasha Roiz] has the power right now so we’re definitely a band on the run.”

Based on behind-the-scenes photo shared by Bitsie Tulloch, who plays as Juliette/Eve, on Twitter, it appears that the gang may eventually return to the spice shop as their headquarters. Interestingly, Portland’s new mayor Renard is also seen on the said location.

“Why is Renard in his jammies in the spice shop, you ask? Find out on episode 603 of @nbcgrimm!” the caption reads. Tulloch also shared that the aforementioned episode has been directed by Giuntoli.

It can be recalled that despite Renard saving Nick from the Black Claw leader, Conrad (Shaun Toub), the two will still be at odds with each other. It is speculated that although the former made a heroic effort, his betrayal will not be easily forgotten by the rest of Scooby Gang.

There might even be more intense encounters between Nick and Renard as it is possible the mayor has turned to the dark side after his daughter Diana (Hannah R. Lloyd) provoked him into killing the said villain using a voodoo doll. However, it remains to be seen if this comes to fruition.

Season 6 of “Grimm” is slated to premiere sometime in October. Production for the new installment is reportedly underway in Oregon.

'One Piece' chapter 828 spoilers: Battle with Big Mom could start