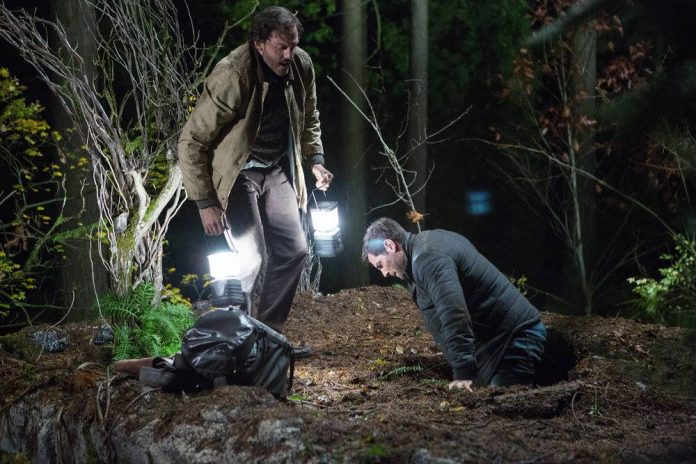 Upcoming new episode of NBC’s hit series “Grimm” for season 5 will have the team dealing with a deadly assassin and finding a treasure overseas.

Titled “Into the Schwarzwald,” the promo for episode 12 which sets the milestone as the show’s 100th installment, features Nick and Monroe in an ancient location at a church. The latter announces that they have found what they are searching for centuries. The voiceover then teases that it will be the event that holds they to everything.

The synopsis reads, “Nick (David Giuntoli) and Monroe (Silas Weir Mitchell) find a treasure in Germany that has been hidden for centuries. Back in Portland, Capt. Renard (Sasha Roiz) joins Hank (Russell Hornsby) and Wu (Reggie Lee) to track down a deadly assassin who has thrown Portland into havoc. Little do they know that Eve (Bitsie Tulloch) is on a hunt of her own for the same man. Meanwhile, someone from Rosalee’s (Bree Turner) past tracks her down. Claire Coffee also stars.” Viewers will also see Jacqueline Toboni and Damien Puckler appear as guest stars.

Meanwhile, next week’s episode titled “Silence of the Slams,” will have the ancient Wesen Warrior Tradition finding its way into the modern world of Luchador wrestling.

A local mask maker will apparently target Wesens to create a Luchador mask that gives great power to the wearer. The team will then work to put a stop to the killings, with Capt. Renard considering an offer that will bring him closer to his destiny. On the other hand, Eve’s further investigation of the recent incident will raise new questions. Joseph Julia Soria will join the ensemble for a short appearance.

Down the road, Nick will stumble with a Wesen disease that is said to be the inspiration for the modern-day werewolves.