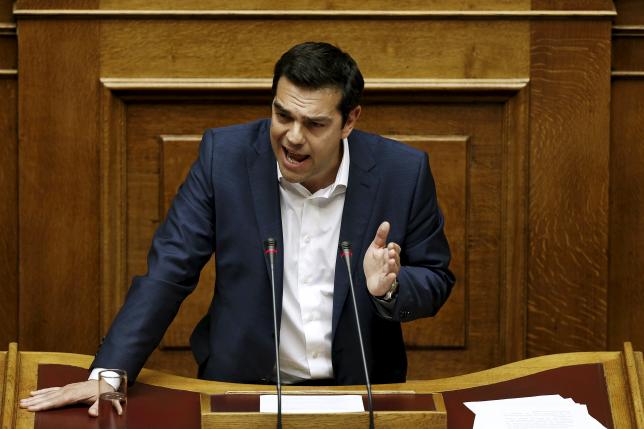 Greek Prime Minister Alexis Tsipras will resume talks with euro zone lenders in Brussels next week after telling parliament he rejected the creditors’ “absurd” terms for a cash-for-reform deal to keep his country from default.

The unresolved Greek debt impasse, which is weighing on financial markets and could hit global economic recovery, will hang over a Group of Seven leaders’ summit in Germanystarting on Sunday. A German spokesman said Tsipras was not invited to the G7 talks.

Greece postponed a payment due to the International Monetary Fund on Friday until the end of June, highlighting its precarious cash position and spooking markets, but giving itself a few more days to negotiate a deal linked to some future debt relief.

In a defiant speech to parliament on Friday, the leftist prime minister balanced indignation at what he called “a very bad negotiating trick” with confidence that a deal was “closer than ever before” to keep his country in the currency bloc.

An EU diplomat said Tsipras would fly to Brussels on Tuesday before a two-day EU-Latin America summit, and that would be an opportunity for political talks on a solution, while experts from Greece and the EU/IMF lenders work on detail in parallel technical negotiations.

By focusing anger on two of the lenders’ key demands – the scrapping of an income supplement for the poorest pensioners and the hiking of value-added tax on electricity – Tsipras left open possible alternatives to those measures to clinch an agreement.

EU diplomats have said mid-June is the final deadline for a deal to secure ministerial approval and parliamentary backing for disbursement before Greece’s 240 billion bailout expires at the end of the month. The lenders added an incentive by raising the prospect of releasing an additional 10.9 billion euros in frozen funds originally earmarked for bank recapitalization to tide Athens over a big repayment hump in July and August.

German Chancellor Angela Merkel tried to force a deal before she chairs an annual meeting of leaders of major industrial democracies at Schloss Elmau in Bavaria from Sunday.

She is keen to avoid it turning into another crisis summit on the euro zone that would showcase Europe’s difficulties in resolving the problems of its single currency.

European officials said they did not want to be lectured on Greece by U.S. PresidentBarack Obama, but they expected Merkel, French President Francois Hollande, Italian Prime Minister Matteo Renzi and the presidents of the European Commission and the European Council, Jean-Claude Juncker and Donald Tusk, to discuss the way forward to a solution on the sidelines.

An Obama administration briefing reporters ahead of the G7 said: “We’re obviously encouraging all sides to continue to focus on finding a solution that’s going to allow Greeceto chart a path to recovery.”

Tsipras is under pressure to sign a deal this month while trying to placate hardliners in his Syriza party who oppose the terms creditors are demanding.

One far-left deputy minister suggested snap elections as a way out, by obtaining public legitimacy for difficult decisions to secure aid.

But two ministers said on Saturday they saw no case for an early poll and an opinion poll showed Greeks have little appetite for a return to the ballot box just five months after Tsipras won power on a radical leftist agenda to end austerity.

The poll by Metron Analysis for Parapolitica weekly showed only 35 percent of Greeks want the government to refuse to compromise with lenders, while 47 percent want it to reach a deal even if it means making concessions.

Some 73 percent saw no need for new elections to approve an eventual accord, compared with 22 percent who said a popular vote was necessary. The survey also showed 79 percent want to remain in the euro zone, confirming previous poll findings.

The conciliatory public mood contrasted with anger among Syriza leftists at the lenders’ proposal that crossed many of the government’s “red lines”, demanding tax hikes, privatizing strategic state assets and refraining from any unilateral action to restore collective bargaining, as well as the pension cuts.

Tsipras called on the creditors to accept Greece’s rival proposal that would reverse labor and pension reforms, calling it the only “realistic” proposal on the table.

“The Greek government cannot consent to absurd proposals,” Tsipras told lawmakers. He also refused to sign any deal that does not include the debt relief he has long demanded.

Greece wants to restructure its huge debt through a mix of cheaper refinancing, extending maturities, switching some loans into perpetual or GDP-linked bonds and a principal write-off, but the plans have no support in the euro zone.

On Thursday, Athens decided to bundle some 1.6 billion euros it was scheduled to pay the IMF in four installments into a single payment at the end of June, skipping a 300 million euro payment due on Friday.

It was the first time in five years of crisis that Greece has postponed a repayment on its bailouts from euro zone governments, the European Central Bank and the IMF. The rare tactic does not constitute a default.