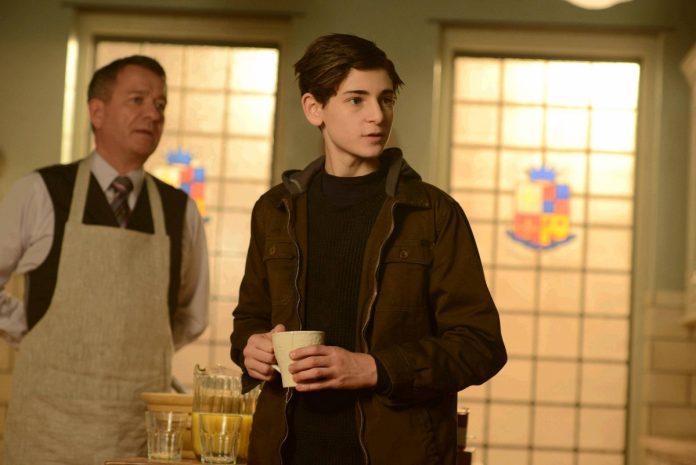 James Gordon (Ben McKenzie) will try to clear his name in an all new episode of Fox’s thriller series “Gotham” season 2.

Titled “Wrath of the Villains: Into the Woods,” episode 17 will feature Gordon discovering a clue when he stole his case in an attempt to straighten out the records. He will approach Edward Nygma (Cory Michael Smith) for help.

Meanwhile, Penguin, also known as Oswald Cobblepot (Lord Taylor), will have a change of heart. He will find out about his step family’s true role in his father’s death which is teased to awaken him from his conditioning.

Down the pipeline, Hugo Stange will put a wrench in young Bruce Wayne (David Mazouz) and Alfred’s (Sean Pertwee) next moves as they track down one of Thomas Wayne’s former friends from Project Chimera. Barbara Kean (Erin Richards) will also go out of her way to make amends with Gordon.

Mazouz recently participated in a live question and answer panel on Facebook wherein he answered fans’ queries on some of interesting facts about him.

When asked who is his favorite character from the DC canon, “I’m gonna put Batman, yeah I love Batman,” he replied. He also teased that when it comes to his role as Bruce, “Things are gonna be really cool. There will be a major bad by the end of this season and Bruce is involved in taking him down and the good guys really have to unite.”

He added that what actually attracted him to become part of the show is the narrative that allows fans to see Batman grow up. “Overtime evolving into Caped Crusader. That’s really a major part of the show.” If given a chance to play another character, he shared that he finds Hugo Strange interesting, “Different from anything you’ve ever been seen before. He’s so methodical and creepy. He’s so logical and crazy,” he stated.