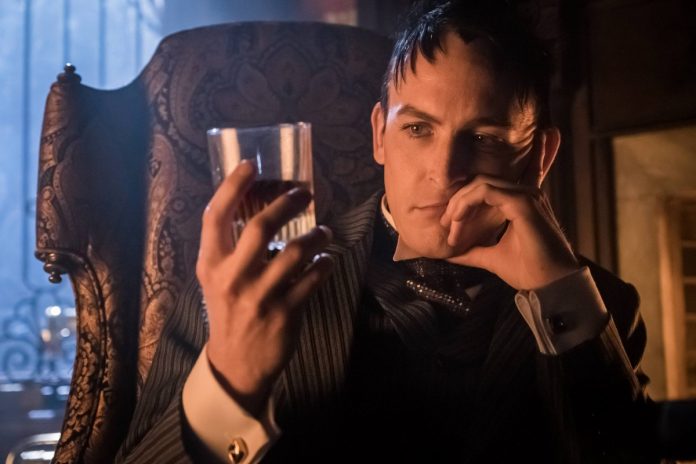 Lee (Morena Baccarin) and Mario (James Carpinello) will try to have their rehearsal dinner free from danger in the upcoming brand-new installment of FOX’s “Gotham” season 3.

Titled “Mad City: Time Bomb,” the good-looking couple prepares for their big night when someone threatens Mario. Luckily for them, Jim Gordon (Ben McKenzie) is back on the job and appears to be ready in keeping them, particularly Lee, out of harm’s way. Falcone (John Doman) also seeks the help of Jim.

In the promotional clip for the upcoming episode, Falcone says, “Now I know who’s behind this, I can take care of it, my way.”

Jim warns him, “Do you think you’re gonna walk away? I’ll find out what happened,” to which Falcone replies with, “I’d let it go.”

The clip ends with his ominous statement, “Gotham will burn,” as a car suddenly explodes.

Down the line, episode 11 dubbed “Mad City: Beware the Green-Eyed Monster,” will have everyone racing for a cure as the virus begins to spread in the city and the laboratory that is developing the remedy is compromised.

Elsewhere, Mario and Gordon will have a face-off before the former’s wedding, Selina (Camren Bicondova) meets an unexpected face, and Barbara (Erin Richards) comes to Nygma with information about Isabella (Chelsea Spack).

In other news, Robin Lord Taylor who portrays Oswald Cobblepot recently commented on assumptions that his character may be gay and will potentially develop a romantic relationship with Nygma. It can be recalled that as the third season progresses, the two continue to have an unexpected bromance.

During the recently held Rhode Island Comic Con, the actor revealed that people are reaching out to him saying that they are fine with whatever sexuality he has but they do not like the idea of changing the canon. He felt that their statement appears to be contrasting.

“You come to me and you say to me that, ‘I’m okay with you being queer, but I’m upset that you’re changing a canon character.’ What you’re saying to me is ‘I am homophobic and I am afraid of gay people.’ That’s exactly what you’re saying,” he said.