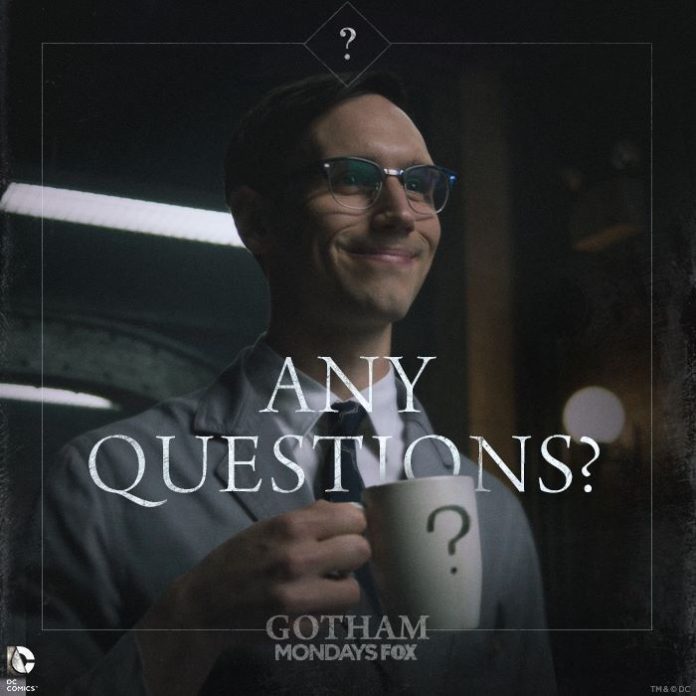 While it has been initially announced even before its pilot aired that “Gotham” will not be a series focusing on Batman, but rather on the development and origin of iconic DC Comics villains, the second season is subtitled “Rise of The Villains”, as the show focuses more on the “rise” of iconic characters to the path of villainy. After having a pseudo-Joker, Theo Galavan, more of The Penguin and now The Riddler are rising also.

In an interview with ComicBook.com, actor Cory Michael Smith, who plays Edward Nygma, talked about his character’s future as The Riddler, and how the most recent episode of the season, “Mommy’s Little Monster”, has a strong impact on his path to becoming one of the most iconic Batman villain in comic book history.

In the interview, Smith shared that what happened to Ed Nygma, where his other “self”, the evil and confident one as it seems, was gone and now he himself is the evil one. According to the actor, the “evil” one did not take over Nygma, but rather, it’s about the parts of Nygma that he could not accept beforeuntil now.

“So this episode tonight, for me, was about the moment that he stops running away from this person or rebuking him or being terrified of these parts of himself,” he said. “He embraces them at the very end, so he becomes this much more whole person. So now, it’s about playing the role of Tin Man and trying to work this new body, and responding to situations in a very different way. He’s now accessed these parts of him, and he can use them, but he may not be skilled with them yet.”

With that, viewers will see Nygma “change drastically”, as he now starts to exhibit a different approach of communication towards people he works with within the GCPD and with Penguin.

About that, the actor also teased some details about his encounter with Oswald Cobblepot in the show.

“It happens a bit coincidentally, I run into him, and he’s very not well,” he shared. “I am a saving grace, an angel, and I get to play Nurse Edward. I kind of save him from being at the end of his rope, I rescue him and nurse him back to health, lovingly and with admiration. That is the beginning of our friendship.”

But most of all, he teased fans of a look closer to the comic book villain that Nygma isthe green suit of The Riddler.

“Certainly a green suit not the Riddler suit yet, but there will be some more green.”