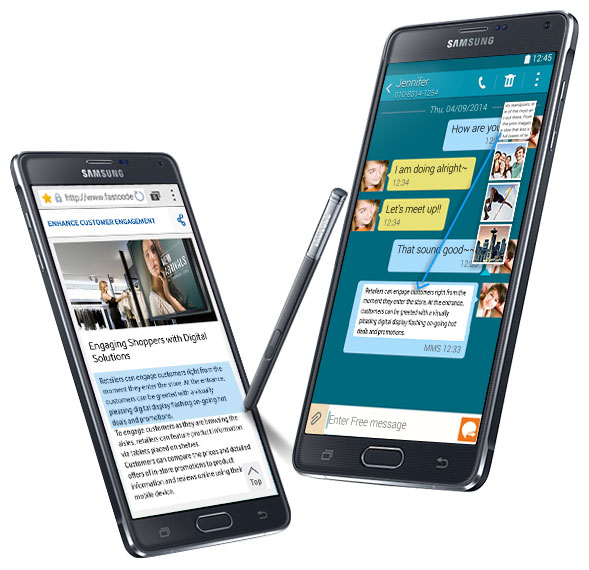 When it comes to convenience, many users are beginning to opt for a phablet as it offers a lot of features found in tablets that are packed in a device that is easier to carry.

Arguably, leading the phablet market is the Korean giant phone manufacturer Samsung with its Note series. Google has also joined the competition, with Nexus as the device it directly maintains and which runs on its latest Android operation system.

Samsung and Nexus recently released their latest additions, Galaxy Note 4 and Nexus 6, respectively. So how do they compare?

For Note 4, it has 5.7-inch display with 2560 x 1440 pixel (2k) Quad HD Super AMOLED panel and 515 pixels per inch using Gorilla Glass 4 while Nexus 6 has a slightly bigger 6-inch display with 2560 x 1440 pixel (2k) AMOLED panel and 493 ppi in Gorilla Glass 3. Both phones features the latest displays available which offer vibrant colors and viewing angles that do not distort. However, with the use of Super AMOLED, Note 4 is better in terms of almost perfect color reproduction with accurate colors. It also has different settings to achieve more naturally looking images.

For their performance, both phones are powered by Qualcomm Snapdragon 805 chipset with Quad-core 2.7GHz Krait 450 CPU, accompanied with 3GB of RAM and the Adreno 420 GPU. Note 4 runs on Android 4.4 KitKat with TouchWiz while Nexus 5 has the latest Android Lollipop 5.1.1.

Batteries are the same 3220 mAh with Qualcomm Quick Charge 2.0 technology and can last eight hours when use maximally, but Note 4’s battery can be removed while Nexus 6 is built-in in order to have a more sleek-looking design. They also both have a stylus pen. Note 4 extra features include fingerprint sensor, IR blaster and a Micro-SD card.