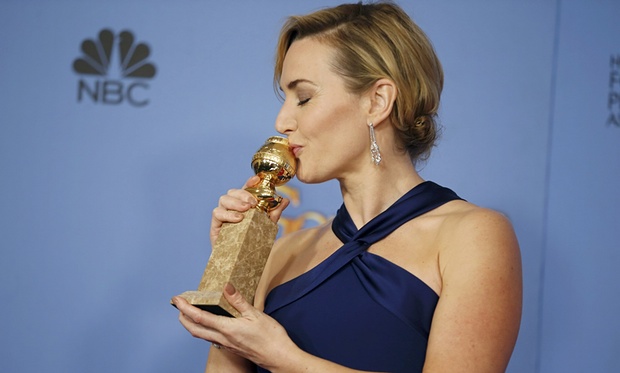 Amidst the excitement at the 73rd Golden Globe Awards on Sunday night was Kate Winslet winning Best Supporting Actress for a movie. She said she did not expect to win and so she did not prepare a speech.

Winslet won the award for her role as Joanna Hoffman in the Danny Boyle film “Steve Jobs.” Wearing her Ralph Lauren royal-blue gown with criss-cross halter neckline, she said during her acceptance speech that she could not believe that it was actually happening. Other actresses nominated for the category were Jane Fonda, Jennifer Jason Leigh, Helen Mirren, and Alicia Vikander.

Backstage, she told reporters that she had plans for a quiet night with a massage, but that she would have to cancel it. Winslet also added that it has been a great year for women in film, noting how women have become empowered in terms of performance. She likewise mentioned how she has been very blessed to have worked for 23 years in the industry.

This is Winslet’s fourth trophy from the award-giving body. It was in 2012 when she won her last award at the Golden Globes for the television miniseries “Mildred Pierce.” In 2009, she garnered two awards for her performance in “Revolutionary Road” and “The Reader.” She also had a nomination for best supporting actress for a movie in 2002 for her film “Iris.”

Yet even for a veteran at the Golden Globe Awards, Winslet expressed her shock and daze. Amidst the overwhelming reaction, however, she was able to thank her husband Ned Rocknroll, her costar Michael Fassbender, director Danny Boyle and screenwriter Aaron Sorkin.