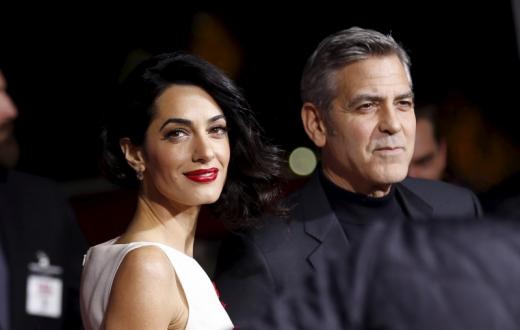 In a rare appearance together, George Clooney and Rihanna played “Never Have I Ever” with Ellen DeGeneres in “The Ellen Show.”

DeGeneres, 58, Clooney, 54, and Rihanna, 27 held paddles with the lines “I Have Never” and “I Have” on each sides as the host asked a series of challenging questions like “Never have I ever texted a nude selfie” — which only Rihanna was guilty of — which all three of them had to answer.

“Never have I ever swam naked in Lake Como,” the host asked, and obviously, Clooney, who has an Italian lakefront residence, flipped, “I have.”

“You haven’t done that?” the actor asked. “No, because me and Rihanna are haven’t been invited in your house,” DeGeneres noted.

Both of the guests did admit that they have “been drunk before noon,” and have never “hooked up with someone over 50.”

Clooney, who was still a bachelor until he was in his 50s, recalled his bachelor days when he answered that he had forgotten the name of a person he was fooling around with. He justified his answer, saying, because he was just “drunk before noon.”

Clooney also got up close and personal with DeGeneres by detailing how he proposed to his wife, Amal.

“I plotted the whole thing out, had the ring hidden behind her. I had music playing, my Aunt Rosemary’s gonna sing ‘Why Shouldn’t I.’ Everything was planned out, and I’ve cooked dinner…” he recalled.

“I said, ‘I couldn’t imagine spending the rest of my life without you,’ And she kept looking at the ring, and she was looking at me and she’s like, ‘Oh, my God,'” he continued.

After 25 minutes without getting any answer, Clooney said,/ “‘Look, you know I hope the answer is yes, but I need an answer ’cause I’m 52, and I could throw out my hip pretty soon if I don’t get an answer.’ And then she said, ‘Oh, oh yes.'”