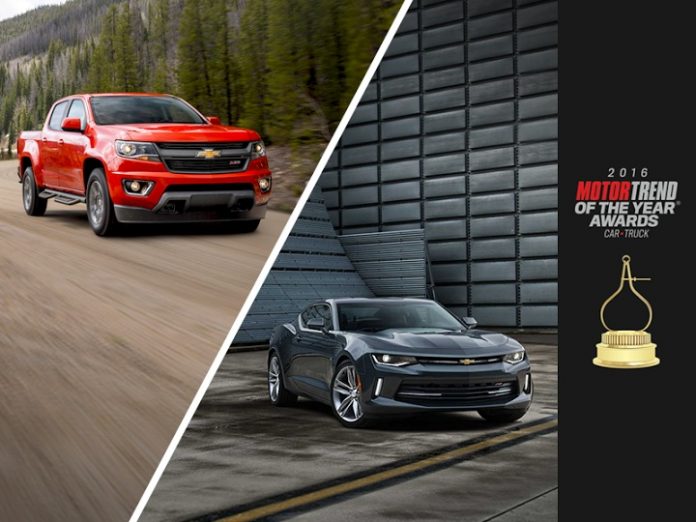 General Motors is on a roll, bagging two awards out of three from Motor Trend magazine. Its Chevrolet Colorado won Truck of the Year for the second year in a row, and Car of the Year went to its Chevrolet Camaro.

For the second year running, the Chevrolet Colorado brought home the Truck of the Year Award. It beat all other contenders, namely the Toyota Tacoma, the Nissan Titan XD, the GMC Canyon and Sierra 1500, and General Motors’ own Chevrolet Silverado 1500.

Motor Trend based its decision on a number of factors, one of which is its engine. The 2016 Colorado packs a 2.8-liter Duramax diesel engine, the only mid-size truck other than the GMC Canyon to have such power.

The award is significant for the automaker as it validates its re-entry into the mid-size truck market, according to CNN Money. Ford and Fiat Chrysler have already left behind this market and focused instead on their full-size F-series pickup and full-size Ram pickup, respectively.

In addition to the award, the 2016 Colorado is doing well in terms of sales. Around 70,000 units of the vehicle have been sold from January to October, making it GM’s eighth most popular model, according to USA Today.

Meanwhile, the 2016 Chevrolet Camaro was awarded as Motor Trend’s Car of the Year. With a new light design as its main selling point it is at least 200 pounds lighter than any of its previous models  the 2016 Camaro beat its competition, including the Toyota Mirai, the BMW 7 Series, the Honda Civic, the Mercedes-Benz GT S, the Mazda MX-5 Miata, and the Audi TT.

The Camaro is “one of the finest driving vehicles in the world at any price, though its price is well within reach of the average consumer,” said Motor Trend’s editor-in-chief Edward Loh, as quoted by CNN Money.

As for the last award category, the Volvo XC90 emerged victorious among its many tough competitors and won SUV of the Year.

Motor Trend first gave its Car of the Year Award in 1949. The award has run continuously until now and has given rise to all the other award categories mentioned in this article.