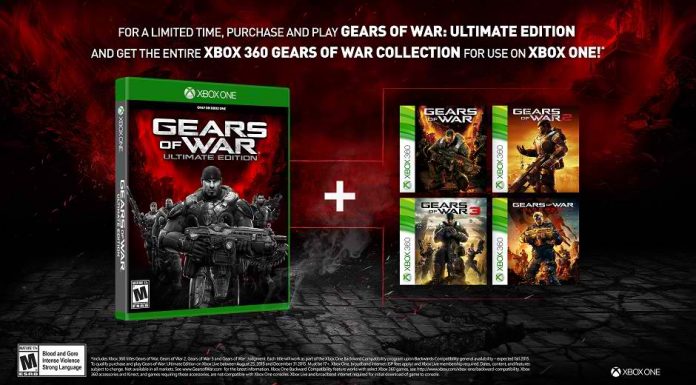 Players who will be getting their fix of the upcoming Gears of War: Ultimate Edition will be in for a very good treat, as they will also be getting all other previous Gears of War titles for the Xbox 360, playable on the Xbox One through Backward Compatibility.

Playing these Xbox 360 title on the Xbox One means that players can now utilize features that they can’t on the original Xbox 360 experience of the games such as Game DVR, Snap, screenshots, and the ability to play with friends online no matter what console they are using.

Gears of War: Ultimate Edition will feature new game typesTeam Deathmatch, King of the Hill (Gears of War 3 style), and new 2v2 Gnasher Executionand a new set of Xbox Live achievements that are worth 1,250 Gamescore. A total of 19 different maps are available, along with 17 unlockable Gears of War 3 characters for Multiplayer progression. Fan-favorite Gears of War 3 features have also been added such as Enemy Spotting, Multiplayer Tac-Com, and improved sensitivity customization.

Xbox Head Phil Spencer recently revealed on Twitter that the PC version for the game would follow shortly after the release of the Xbox One version. “Gears on Win10 is later than Xbox One version,” he said, when asked by fans over his account.

Gears of War: Ultimate Edition will be released for the Xbox One on August 25.

iOS 10 jailbreak release date update: No date yet for the...