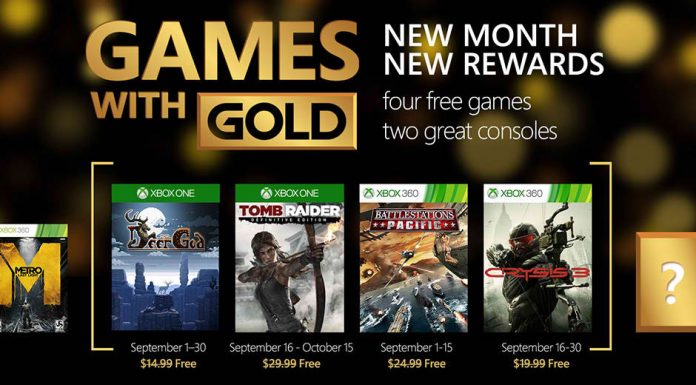 Another month, another set of FREE games exclusively for Xbox live Gold members with the Games with Gold program!

This month’s line up will prepare Xbox One players for the coming of the much-anticipated Xbox exclusive Rise of The Tomb Raider with free for Xbox Live Gold members. Also coming free for the Xbox one is The Deer God, a 3D sidescroller adventure that is about religion and features survival, reincarnation, and karma.

Xbox 360 players, on the other hand, will be receiving Battlestations: Pacific for the first half of the month, and Crysis 3 will be available for the latter part of the month.

Tomb Raider: The Definitive Edition takes the iconic female adventurer Lara Croft, as she finds herself shipwrecked somewhere in Japan, as she learn to fight and survive. Take on the origins of Lara Croft before indulging in the newest adventures coming soon!

The Deer Godtalks about religion, karma, reincarnation, life, and death, as players play the role of a hunter suddenly switched to a body of a deer, and vice versa.

Go back in World War II era, and take control of American and Japanese fleets in Battlestations: Pacific. Strategize, win, and change the course of history in this game as either and admiral, or an ordinary sailor.

Finally, dig into the high-tech super-suit and venture in the first-person shooter world of Crysis 3.