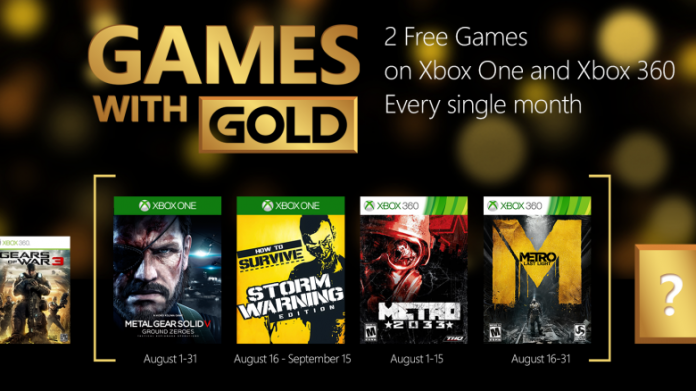 Another month, another set of FREE games exclusively for Xbox live Gold members with the Games with Gold program!

The Xbox One gets the prologue to the upcoming and highly anticipated Metal Gear Solid V: The Phantom Pain, and a survival zombie apocalypse game How to Survive: Storm Warning Edition. Xbox 360 players get their fix on two highly acclaimed Metro titles coming their way.

Metal Gear Solid V: Ground Zeroes for the Xbox One bring players to Cuba to rescue allies that are being held captive. The game features an open-world type of approach to gameplay, and all the while keeping the element of stealth and the gadget arsenal that Metal Gear is known for. Players who haven’t had their fix yet of this game should do now, as the upcoming Metal Gear Solid V: The Phantom Pain is getting closer and closer to its release in September.

How to Survive: Storm Warning Edition brings players to an island with nothing but a small number of toolsand the knowledge to craft various kinds of weapons found from scrap everywhere. Why? To fight off hordes of zombies, of course!

Now, Xbox 360 Gold members get their fix of two top first-person shooter games, Metro 2033 and Metro: Last Night. Both titles take players to a post-apocalyptic world, in Moscow, where people thrive in the subway system and bullets become a form of currency. Danger and action await players as they fight off mutated beingsor fellow humans.

Facebook news: Mark Zuckerberg to donate 99 percent of his net...