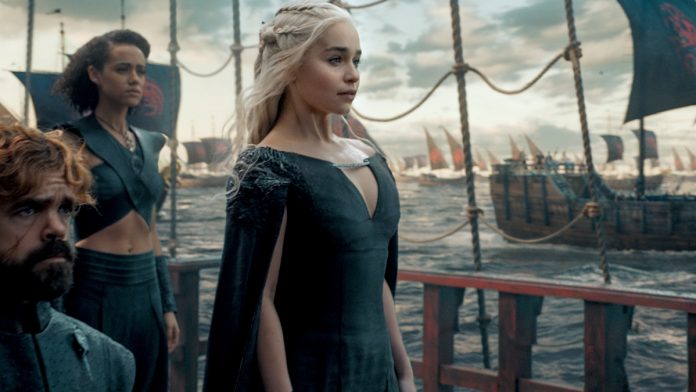 “Game of Thrones” is halfway through filming season 7 in Seville, and most of the cast members have been out and about in the Basque country. Recently, some of the actors have taken a break from filming as they were seen enjoying a soccer match.

According to Watchers on the Wall, Emilia Clarke (Daenerys), Alfie Allen (Theon), Nikolaj Coster-Waldau (Jaime), Peter Dinklage (Tyrion), Gwendoline Christie (Brienne), Liam Cunningham (Ser Davos), Conleth Hill (Varys) and Kit Harington (Jon Snow), as well as showrunners David Benioff and D.B. Weiss, attended a match between Sevilla and Barcelona. In images posted on the website, it can be seen that the cast posed for pictures while the local team presented them with personalized Sevilla shirts.

Apart from the game, it appears that some of the ladies of “GOT” had a night out as Clarke posted a photo of her, Lena Headey and “Game of Thrones” hair supervisor Candice Banks on Instagram. The actress captioned the shot, “Now that’s what I call a cracking gals night…half way through filming?! Bring it on season 7!”

The cast has been hard at work filming the upcoming season of the HBO series, which is set to run for seven episodes instead of the usual 10. Many leaked photos have revealed that when the show returns, the epic first meeting between Jon Snow and Daenerys will take place, and it is also expected that the people of Westeros will be defending themselves against the White Walker threat in season 7.

According to Watchers on the Wall sources, Headey, Dinklage, Clarke, Harington, Hill, Iain Glenn (Ser Jorah), Nathalie Emmanuel (Missandei), Anton Lesser (Qyburn), and Hafr Jlus Bjrnsson (Ser Gregor) all worked together on a scene filmed on Friday, Nov. 5. The scene is said to involve characters bringing a wight into the Dragonpit as proof of the White Walker threat.

It remains to be seen whether Cersei and her group will band with Jon and Daenerys as this threat looms large. It’s likely that a truce of sorts will be called before the main players get back to fight over the Iron Throne in season 7.