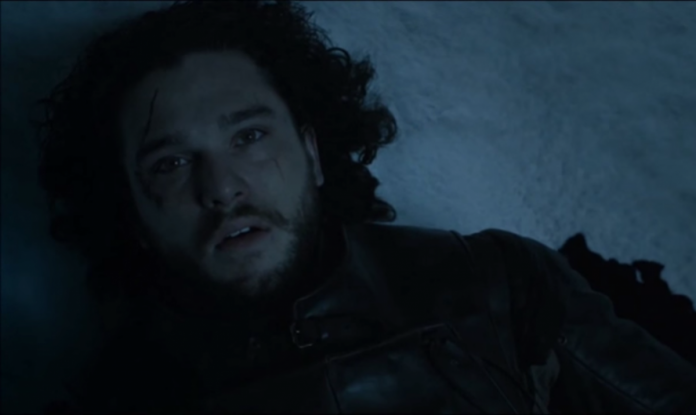 The fate of Jon Snow in “Game of Thrones” season 6 still remains uncertain, with the recent trailers seemingly confirming the worst.

Back in the final episode of “Game of Thrones” season 5, Jon Snow (Kit Harington) fell to the hands of the Night’s Watch and was left bleeding and dying. However, fans are still hoping that the character may have survived the stab wounds and will return for season 6 in any way or form.

In one of the trailers posted on BBC, it showed snippets of the final episode of season 5, along with Jon Snow succumbing to death.

In another trailer on Inquisitr, the lengthier preview showed the faces of the different men and women who were killed in the series. Included in the roster was Jon Snow, which seemed to have confirmed that he is dead. Especially without “The Winds of Winter” in the shelves, fans have no way to find out the truth until the new season premieres.

Nonetheless, there may still be a tiny ray of hope on the character’s survival. In an interview with actress Natalie Domer, who plays Margeary Tyrell in “Game of Thrones,” she gave the impression that the actor may be dead but not for long.

She told Channel 5, “If you get stabbed that many times, you’re dead, you know. There are some basic medical rules that even apply in Westeros. So Jon Snow is dead right now.”

Does the phrase “right now” mean anything? The actress did not elaborate further but added that the upcoming season of the series is the “most unpredictable yet.”

Fans will find out when “Game of Thrones” season 6 returns to the small screen on April 24.

Vampire Diaries season 7: Damon is his snarky self in new...

'The Expendables 4' updates: $100 million budget allotted for the sequel,...