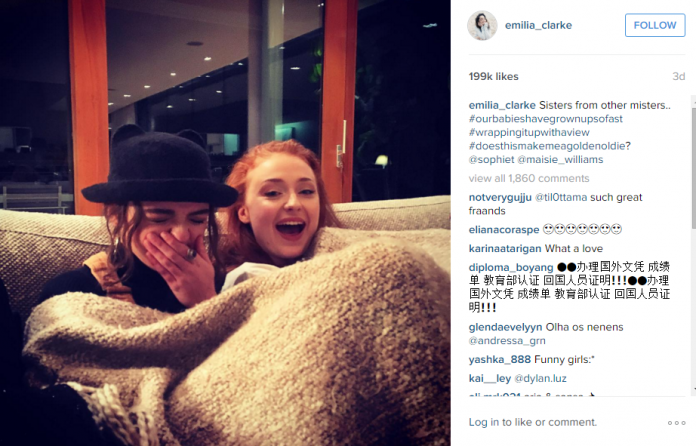 Fans of HBO’s highly popular fantasy series “Game of Thrones” may be delighted to find out that the recent sightings of their favorite stars of the show seemingly suggest that season 6 may be close to wrapping up its productions.

According to Independent, some of the cast members were seen partying at Ulster Museum in Northern Ireland. Although this does not necessarily mean that the filming is done, it is most likely nearing its completion.

Emilia Clarke who plays Daenerys Targaryen also posted a photo on Instagram of Maisie Williams and Sophie Turner, who portrays Arya Stark and Sansa Stark respectively, during the event. The two sat side-by-side on a couch wrapped in a blanket while laughing at something. It is captioned with the words that reads, “Sisters from other misters..#ourbabieshavegrownupsofast #wrappingitupwithaview #doesthismakemeagoldenoldie? @sophiet @maisie_williams”

Watchers on the Wall reported that knowing who may appear in the next season may give clues on what would happen in the narrative especially since “Winds of Winter” has not been published by author George R.R. Martin yet.

Aside from Clarke, Williams, and Turner, Kit Harrington was also seen in Belfast last week while Clarice Van Houten was there earlier this December. The former portrays Jon Snow whose death still plagues many debates after season 5 ended, while the latter plays the Red Priestess, Melissandre.

Having them together in the same location sparks some rumors that she may revive him in some form or another as the poster released by the home network in promotion of the next installment shows what could be a living Jon Snow albeit having some blood across his face.

Meanwhile, a list of new characters are said to be coming to the small screen. This includes a haggard-looking lord, Captain of the Tower, someone named “Boyce,” and another one named “Fletcher.”

Homeland season 5 spoilers: first look of Frannie as a toddler;...