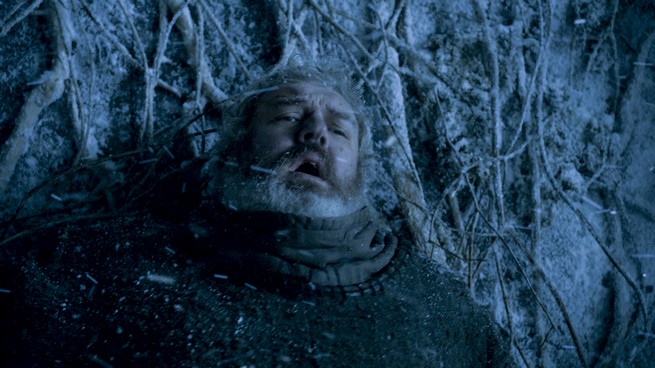 “Game of Thrones” star Kristian Nairn, who played the character Hodor, discussed the fate that his character met in the latest episode of the current season, “The Door.” The executive producers of the series also revealed how they developed the story of Hodor.

In “The Door,” fans found out the origin of Hodor. In the past episodes, it was revealed that Hodor was once able to talk normally and not just say a single word all the time”Hodor.” His entire story was revealed in a mind-bending sequence that ended up being a loop involving his most beloved friend Bran Stark. However, shortly after the reveal, Hodor met his end in a heroic fulfillment of his destiny.

While the episode finale left the strong implication that Hodor died in the hands of the undead wights, Nairn thinks that his “death” was left open-ended.

“The interesting thing is it’s kinda left open,” he told Entertainment Weekly. “You don’t actually see him [die]. It’s implied. So who knows? He may come back as a White Walker, maybe he got away. But it’s a really good way to do it. I couldn’t have asked for a better goodbye to a character I love.”

The actor also discussed that one of the most interesting parts of Hodor’s story was that both his condition and his death were caused by the same personeven if accidentallywho he had considered his most precious friend in life, Bran Stark.

“My favorite part is it ties up the question of why is Hodor ‘Hodor.’ Why does he say the word ‘Hodor’? Only George R.R. Martin or David and Dan could have come up with this. It’s incredibly sad. The minute you finally learn something about Hodor, they kill him!”

Also, with Hodor now gone, the possibility of him ending up in the Iron Throne was gone, toono matter how far-fetched that idea may seem to some.

“Again, we don’t know! But I never expected that anyway, to be fair. I don’t think he’d make a very good king, he’s somewhat limited in his dialogue. I’m considering this open ended because you never know in the crazy world of ‘Game of Thrones.'”