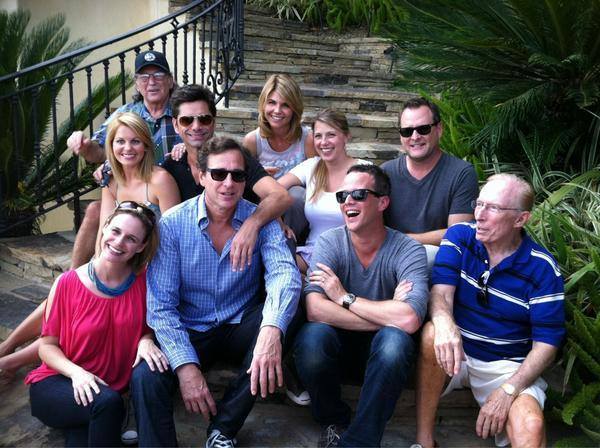 For the better part of seven years from 1987-1995, Full House became a beloved television sitcom and a permanent habit of viewers who loved a great family comedy. It was also the series that launched the Olsen twins to superstardom.

Now that Netflix has announced that it is picking up the show’s return after an 18 year absence, original cast member John Stamos, who has kept himself constantly busy and relevant with stints in television and movies in the almost two decade wait, is constantly posting teases on Instagram to hype up the new show, entitled Fuller House.

One of his posts showed his hand linked with that of Lori Loughlin, who plays his love interest Aunt Becky in the series. Stamos plays Uncle Jesse, one of the most memorable characters in the show.

The photo was captioned Becky and Jesse together forever. The post was liked 110,700 times and commented by 12,200 fans.

In another post, he is seen reading the script sporting his signature brushed up do from the 80s, captioned: “And we’re back! Same sideburns- different decade #FullerHouse #Netflix.”

While it was earlier reported that the Olsen twins, who famously played Danny Tanner’s (Bob Saget) youngest daughter Michelle, will not be joining the cast, Ted Sarandos, Netflix’s chief content officer, revealed that there is still hope to get the duo on board.

“The Olsen twins are teetering on whether or not they’ll be around,” Sarandos said.

Her character is described by a TVLine report as “attractive, vivacious… and youthful and having quite an appetite for Danny and isn’t afraid to shower him with affection.”

Fuller House will have 13 episodes and will feature a one hour special for the Tanner family reunion. The show is expected to air sometime in 2016.