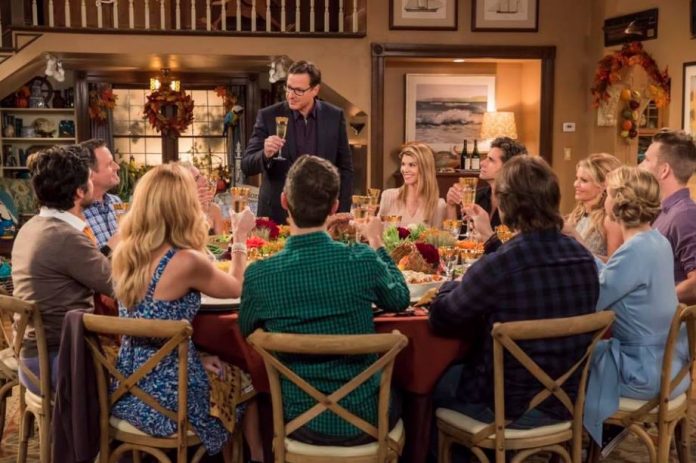 The Tanners are returning for another season of “Fuller House” on Netflix, and ahead of the season 2 premiere, several batches of promotional photos were released showing the entire family celebrating the holidays.

One photo shows the whole gang seated at a table as they celebrate Thanksgiving, with Danny (Bob Saget) giving the first toast. Another set of photos shows the entire family celebrating Christmas, and everyone is standing around the tree in matching pajamas. One shot shows D.J. (Cameron Bure) and her boys taking pictures with Santa Claus.

Other photos show D.J., Kimmy (Andrea Barber) and Stephanie (Jodie Sweetin) getting into the spirit of Halloween as they dress up in wacky costumes. One picture shows D.J. and her sons dressed up as Goldilocks and the Three Bears, while Kimmy and her ex-husband, Fernando (Juan Pablo Di Pace) paid tribute to Lucille Ball and Desi Arnaz. As for Stephanie, she enlisted Kimmy’s brother, Jimmy (Adam Hagenbuch) to join her as they opted to go as a pair of zombies. At one point, it looks like D.J. has decided to pull a prank on her children and their friends as she runs around with a bloody bandage on her right hand.

Cameron Bure also spoke with Los Angeles Confidential about the new season, saying that the show will feature some very special guest stars when it returns to Netflix.

“I can’t talk about all of them but New Kids on the Block is on and Alan Thicke, and a few other surprise people,” said the actress. “And then the regular legacy cast like Bob and Lori [Loughlin]. They’re all back for a few episodes as well.”

'One Piece' chapter 844 spoilers: Luffy and Sanji stage clash to...