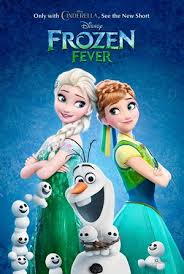 Currently, Frozen 2 is in the works and in its early stage following the success of Frozen Fever. It has a huge following. The Master Herald reports that this creative writing stage of the sequel’s development has been confirmed by no less than a newly blonde-dyed Idina Menzel. While she is very excited about the film, she refuses to provide any defining spoilers or poke at the plot possibilities since she thinks the creative writing stage must best be left unsullied until it’s ready for public viewing.

There are various rumors such as a lesbian angle and Sven backstory. Elsa may have a lesbian angle going according to rumors and go past the Jack Frost route she had in Frozen Fever. Other characters such as Sven and Olaf may be of interest to the writer of the story as well as the fans.

The story will definitely pick up where the awesome sisters left off at Frozen’s Arendelle setting. And their hordes of fans globally are looking forward to seeing the next installment of the film. The Latino Post reveals that after Frozen Fever, there are various possibilities opened up for Arendelle. There is a possibility that Prince Hans may return or that the film makers may oblige repeated requests for a Kristoff Anna wedding to take place. The film is slated for release this 2018. Venture Capital Post also indicates rumors of a possible Olaf love interest.

While most of the details remain shady and unconfirmed for now, there is a brewing Frozen Ever After theme park ride in Orlando, Florida scheduled to open this 2016. The said theme park ride was previously occupied by Maelstrom. They will really experience the environment of the fictional Arendelle setting at Frozen. Fans may continue to enjoy such rumors while the plot or storyline for Frozen 2 is being constructed.