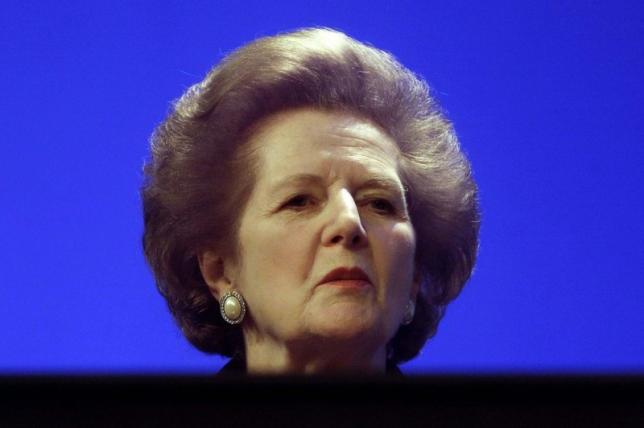 A quarter of a century since Margaret Thatcher was deposed by her own party, Britain’s ‘Iron Lady’ has stirred a row: Would the hero of Prime Minister David Cameron’s Conservative party have voted to leave the European Union?

Thatcher, who died in 2013, grappled with Britain’s EU relationship, supporting membership while in power but also scolding Brussels with a ferocity which ultimately triggered the party coup which ended her premiership in 1990.

When former foreign policy aide Charles Powell suggested Thatcher would have supported the essence of Cameron’s EU deal and voted for membership in a referendum likely in June, he prompted an angry response from many other Thatcher fans.

“It must be a new low for the stay in campaign when they turn to the dead to support them,” said Conservative lawmaker John Redwood who once worked as Thatcher’s chief policy adviser.

“I find it disappointing that Lord Powell should presume to be able to communicate with the dead and tell us what they are thinking,” said Redwood, who opposes EU membership.

Beyond the sensitivities of enrolling a deceased leader into a political campaign, the intensity of the row illustrates both the depth of feeling in Cameron’s party as well as the ambiguity of Thatcher’s own legacy.

In a vote that both supporters and opponents agree will shape Britain’s 21st century fate, both sides are invoking the authority of both Thatcher and her hero Winston Churchill to support their cases.

Supporters of membership say a British exit, or Brexit, would ditch attempts by Thatcher to preserve Britain’s global clout by hedging European integration with a ‘special relationship’ with the United States.

But opponents say neither leader would have accepted Britain should submit to what they say is a doomed European super-state that punches below its weight on the world stage and stumbles from crisis to crisis.

“Margaret Thatcher’s heart was never in our membership of the EU. But I am convinced her head would continue to favor staying in on the conditions now on offer,” Powell said.

“There were certainly times as prime minister when her frustration with Europe boiled over. The one thing I never heard her propose was Britain’s withdrawal from the EU.”

Addressing a turn toward more overt scepticism about Europe after she left office, Powell said she later made incautious remarks about Europe but that he did not believe that was the real Thatcher speaking.

Thatcher, as leader of the opposition, supported membership of the EU’s forerunner in a 1975 referendum but after winning power in 1979 she threatened to halt payments to the EU unless Britain got a refund, known as the rebate.

While supporting the broader ideas of uniting Europe in her 1988 Bruges speech, Thatcher also said that Britain had no interest in “a European super-state”.

Despite her fears about German dominance of Europe after the 1989 fall of the Berlin Wall, she agreed to take sterling into the Exchange Rate Mechanism, which was intended to reduce exchange rate fluctuations ahead of monetary union.

But when she berated then European Commission President Jacques Delors with “No. No. No” in 1990, she prompted her long-term ally Geoffrey Howe to quit the government, triggering a challenge which ended her 11-and-a-half-year premiership.

“The whole time she was in office she supported our membership though with increasing lack of enthusiasm and after she left office she privately thought we ought to leave and told me that,” Moore said.