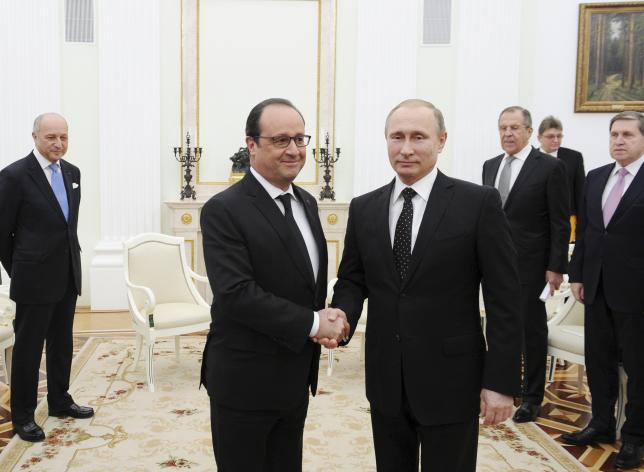 Hollande is on a diplomatic offensive to build a common front against the militant Islamist group that has claimed responsibility for the attacks in Paris on Nov. 13 that killed 130 people.

Islamic State has also said it downed a Russian plane on Oct. 31 over the Sinai Peninsula in Egypt, killing all 224 people on board.

“Our enemy is Daesh, Islamic State, it has territory, an army and resources, so we must create this large coalition to hit these terrorists,” Hollande said in televised remarks at the start of bilateral talks with the Russian leader in the Kremlin.

“I’m in Moscow with you to see how we can act together and coordinate so that we can strike this terrorist group, but also reach a solution for peace,” Hollande said.

Putin said Moscow was ready to unite with Paris against a “mutual enemy” following the downing of the Russian airliner and the attacks in Paris.

However, the leaders avoided looking at each other during their brief televised exchange, underlining the still-awkward relationship between Russia and the West due to the Ukraine crisis and differences over Middle East policy.

Both Russia and France have stepped up their aerial bombing campaigns in Syria but they have different objectives.

Russian warplanes are targeting a wide array of rebel forces – including but not limited to Islamic State – opposed to Moscow’s ally, Syrian President Bashar al Assad.

French and U.S. warplanes are focusing their bombing campaign on Islamic State. Western countries, Turkey and Sunni Arab states such as Saudi Arabia also want Assad to step down.

Earlier this week Hollande held talks in Washington with U.S. President Barack Obama on combating Islamic State. He has also held separate talks in Paris this week with the leaders of Germany, Britain and Italy.

“Our common enemy is terrorism and it has a name, Islamic State,” Hollande told Putin.

MIUI 7 beta out for users to try but only select...