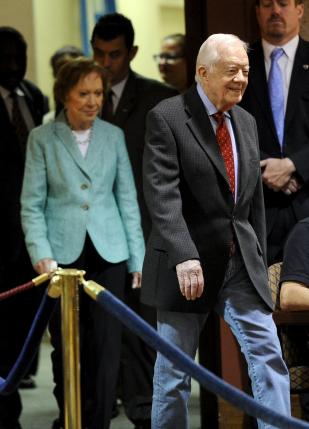 Former U.S. President Jimmy Carter said on Thursday that his cancer has spread to his brain and he will start radiation treatment for it later in the day, adding that his fate was “in the hands of God.”

Carter, 90, held a news conference on his condition barely a week after announcing he had undergone surgery for liver cancer.

Appearing calm and lucid, the former president said he will cut back dramatically on his schedule to receive treatment every three weeks after doctors detected four “very small spots” of melanoma on his brain.

Carter served as president from 1977 to 1981 and became active in humanitarian causes and monitoring elections after leaving office. He won the Nobel Peace Prize in 2002.

His one term in the White House was defined by national economic struggles and the embarrassing Iran hostage crisis.

Asked on Thursday if he had any regrets, Carter said he wished he had sent one more helicopter in the failed attempt to rescue the Iran hostages, adding that he would have been re-elected had the effort succeeded. Republican Ronald Reagan defeated Carter, a Democrat, in the 1980 presidential race.

In a break from tradition, Carter chose to deliver the news about his illness to the media himself. He arrived at the news conference at the nonprofit Carter Center in Atlanta walking normally, smiling and wearing blue jeans.

“I am perfectly at ease with whatever comes,” Carter said, noting his deep Christian faith. “Now I feel this is in the hands of God.”

He said he was pleased that he did not become angry or despaired.

“I am ready for anything and looking forward to a new adventure,” Carter added. “I have had an exciting and venturous and gratifying existence.”

Earlier this month, doctors removed about one tenth of his liver. A biopsy revealed it was a melanoma, a form of skin cancer that is believed to have originated elsewhere in his body and spread to the liver, he explained.

He announced at that time that his prognosis was excellent, though he was rearranging his schedule to receive treatment at Emory Healthcare in Atlanta.

It was shortly after the liver surgery that doctors found the spots of melanoma on his brain, Carter said on Thursday.

The cancer was “likely to show up in other places in my body” he said, without addressing whether doctors had told him how long he could expect to live.

Initially after receiving the brain cancer diagnosis, Carter said, “I thought I had just a few weeks left,” but he added that he remained “hopeful.”

His doctors were consulting with other cancer experts, and he said he did not currently feel any weakness or disability.

Melanomas can be cured if caught early but become more dangerous once they spread. The director of Emory’s Winship Cancer Institute, Walter J. Curran Jr., told the news conference that patients with a melanoma that has spread could not be cured. “The goal is control,” he said.

Due to his treatment regimen, Carter said he will now have to cut back “fairly dramatically” on his schedule, though he has not completely ruled out a trip to Nepal in November.

His son, Jason Carter, will take over as chairman of the board at the Carter Center in November, as previously scheduled.

The centrist former governor of Georgia is credited with helping to stabilize the Middle East as a result of the 1978 Camp David accords between Israel and Egypt.

After losing re-election to Republican Ronald Reagan, he went on to champion wide-ranging international humanitarian efforts.

In a wide-ranging interview last month about his life with Reuters Editor-at-Large Sir Harold Evans, Carter reflected on his childhood in a home without running water or electricity and his concerns about ongoing racial prejudice in the United States. (tmsnrt.rs/1f8BND2)

Carter and his wife, Rosalynn, have three sons and a daughter. They live in rural Plains, Georgia, about 150 miles (240 km) south of Atlanta. Carter, a Baptist church deacon, said he planned to continue teaching Sunday school at his church.

Carter even managed a few moments of humor. When thanking his political colleagues, he laughed and said it was “first time they have called in a long time.”

Backlog of migrants swells in the Balkans, tempers fray