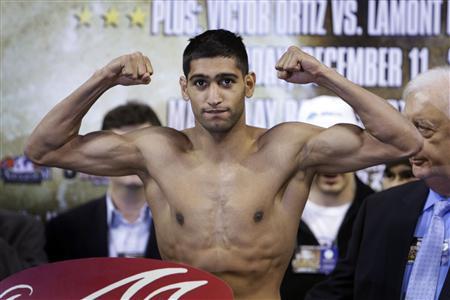 Former unified light welterweight world champion Amir Khan is believed to be making a case for himself for a crack at retired undefeated boxer Floyd Mayweather Jr.

Khan will be facing current WBC middleweight champion Saul “Canelo” Alvarez on May 7th at the T-Mobile Arena in Las Vegas, at a 155-pound catchweight.

Many fans of the sport of boxing believe that Alvarez will be the big favorite over Khan, given his power and boxing skills overall. But according to former heavyweight champion Chris Byrd, Khan actually holds one great motive for taking the fight.

“In my opinion, I think he’s doing it because he’s still chasing Floyd,” Byrd said in a report by Edward Chaykovsky for Boxingscene. “Floyd beat Canelo pretty easy and Amir feels ‘if I beat him too, I’m on that level, Floyd should come out and fight me.'”

Mayweather made his second retirement official after handily defeating former two-time welterweight world champion Andre Berto last September. “Money May” left the sport with an immaculate win-loss slate of 49-0, with 26 victories by knockout.

For his part, Khan had been clamoring for a fight against Mayweather since 2014. Negotiations fell apart, however, and Mayweather eventually chose to fight Manny Pacquiao, after five years of back-and-forth on-paper battles over drug testing agreements and other deals.

Byrd noted, however, that Khan would be having a difficult time against Alvarez, as he believes the latter is simply a more well-rounded boxer who can adapt to every situation, whether the fight turns into a brawl or a technical boxing match.

“It’s a difficult fight for Amir Khan but more props to him for taking up the challenge,” Byrd said.

The winner of the said fight will be taking on Gennady Golovkin, the WBC’s mandatory challenge. That is assuming that “GGG” gets to defend his interim belt against fellow undefeated fighter Dominic Wade on April 23rd in California.