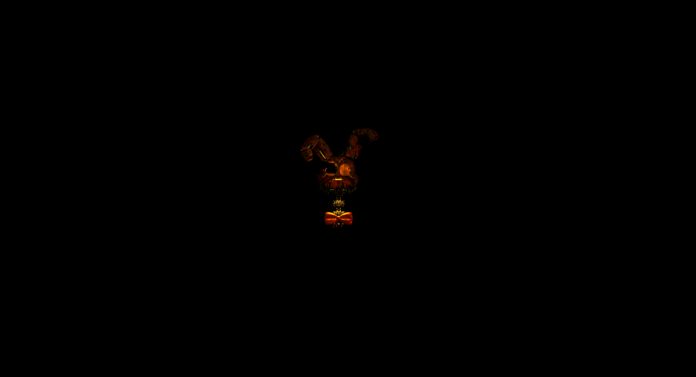 Five Nights at Freedy’s creator Scott Hawthon himself has dismissed speculations that there will be a fifth installment in the franchise but insistent fans are keeping the faith that the latest change in image on the official website of Scott Games could mean that the developer has had a change of heart.

The image however, was clarified to be part of the promotion for upcoming update for Five Nights at Freddy’s 4 which is set for release this Halloween.

According to a report by Design and Trend, the image is an orange version of Bonnie’s head, which has led fans to develop their own theories about the teaser.

Excited fans have taken to forums to air their speculations with some believing that the variation of Bonnie is just a different colored version of FNAF4 Bonnie while some believe that Bonnie’s new look may have huge implications for the DLC, as this could mean that players have to go against Spring Bonnie for the first time in the franchise.

Prior to the change in the website, Cawthon has already tried to manage fans’ expectations about future releases.

“It’s very important for me to say again that there will NOT be a Five Nights at Freddy’s 5. The story is complete, and the Halloween update and new game will not add to it,” he said in his Steam page where he also announced that the upcoming release will be an RPG game called FNAF World.

“That being said, I wanted to use these characters in a new and fun way because they are so near and dear to my heart, and I was excited to work on a type of game that I hadn’t made in a long time,” he said.

According to Cawthon, the objective would be to create a party using the huge selection of characters from the FNAF franchise including the classic, withered, toy, phantom, and nightmare versions.

The DLC is expected for release on PC, Android and iOS by Halloween.