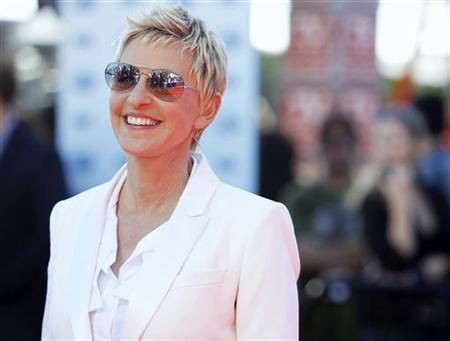 TV host Ellen DeGeneres famously gave her voice to Dory, the optimistic but forgetful fish from the 2003 Pixar film “Finding Nemo.” In an exclusive interview with ET, the 57-year-old comedian talked about what led the film’s director to cast her in the role and revealed what the success of “Finding Nemo” meant for her.

The Emmy winner also revealed that she was cast in the movie at a time when she was at her lowest point.

“I hadn’t worked at all,” DeGeneres told ET. “People don’t realize that, because it took three years to do Finding Nemo. In the time that [The Ellen Show] was canceled, while I was doing nothing, [writer/director] Andrew Stanton had heard my voice on TV and how rambling I was and how I never stayed on topic, and he wrote Dory with me in mind.”

DeGeneres said that the film’s motto, “just keep swimming,” is something that has worked in her own life. She explained that by the time “Finding Nemo” came out, she had already gotten the “Ellen: The Ellen DeGeneres Show.” But in the years that the film was in production, “nothing had happened.”

“So ‘just keep swimming’ certainly applies to me and to a lot of people out there,” the host said.

DeGeneres has had her fair share of trials and setbacks. Before getting her start in comedy, the two-time Oscar host worked as a waitress and vacuum cleaner saleswoman. She came out as gay on her own TV show in April 1997, but the ensuing controversy led to the unraveling of her relationship with former partner Anne Heche. Her TV show “Ellen” was cancelled in 1998, leaving her in a depressed state for three years.

But DeGeneres rebounded. After voicing Dory in “Finding Nemo,” she went on to launch “The Ellen DeGeneres Show,” hosted both the Oscars and the Emmys twice, and married her longtime partner Portia de Rossi. In 2015, Forbes estimated DeGeneres’ net worth to be $75 million.

DeGeneres will soon return as her character Dory in the new animated film “Finding Dory.” The “Finding Nemo” sequel will be shown in theaters on June 17, 2016.

'The Flash' season 2 spoilers: Teddy Sears teases identity of the...

'Sherlock' Christmas special sees a more refined Sherlock; will there be...