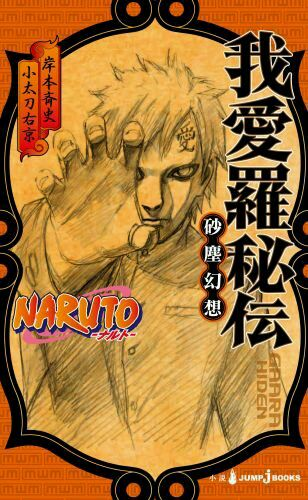 It has been fifteen years since Masashi Kishimoto’s Naruto debuted in the Weekly Shonen jump. After 700 chapters of weekly manga, the main Naruto manga ends, with the world finally at peace and the hero Naruto finally fulfilling his dream of becoming the Hokage. But this is not the last we will see of Naruto and the entire Konoha Shinobi, with the Naruto Hiden (Naruto: Secret Chronicles) manga novel series, telling the story of the Konoha Shinobi after the conclusion of the events of the main manga.

Gaara Hiden, the fifth volume in the spin-off series, will be released in Japan on June 4. The latest Hiden chapter will tell the story of Gaara’s unknown love. In a report by Anime News Network, the plot for the new volume is: “‘Take a wife.’ The five Kages gather after overcoming the crisis from the moon. In one corner, the elders call out to Gaara, the Kazekage of the Village of the Hidden Sand. They say that the 20-year old man must have a meeting for an arranged marriage. They say his partner has already been decided, but…”

In a more recent update, the sixth final volume of the Hiden series will focus on the Akatsuki, the organization that seemed to have been dissolved by the end of the events of the main manga. In a report by Otaku Kart, the sixth and final volume in the Hiden series will tell the story of Sasuke meeting a boy, who claims to be a victim of the Akatsuki. The manga is set to be released on July 3.

“A boy Sasuke met during his journey speaks of how his family was killed by Akatsuki… Itachi and Kisame. Hidan and Kakuzu. Deidara and Sasori. Nagato and Konan. What is the path of the ninja that was illuminated by the light of Akatsuki? The sixth volume in the Hiden series!”

Previous Hiden volumes tells the story of Kakashi, Shikamaru, Sakura, among others.