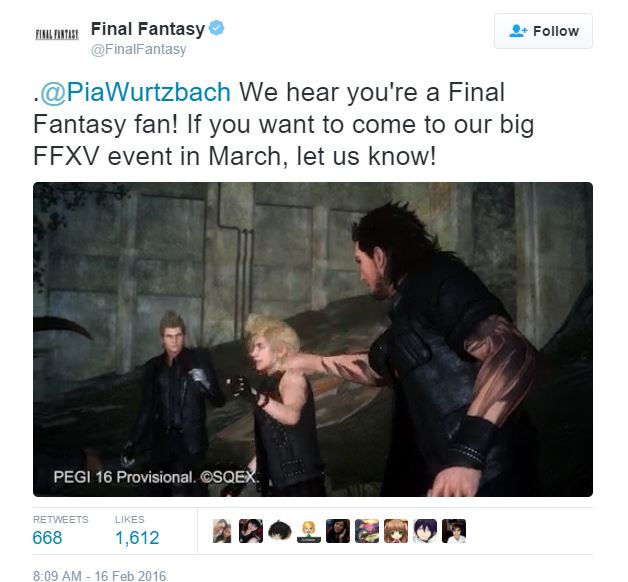 Fans will not have to wait long for the release of “Final Fantasy XV” as Square Enix is gearing for its launch next month. If lucky, fans who will be attending the event may get to see the Miss Universe.

Late last month, Miss Universe 2015 Pia Wurtzbach revealed that she is a “closet gamer,” specifically for the titles “Tekken” and “Final Fantasy.”

The news seems to have reached the developers last week, as they invited her through their Twitter page. They said, “@PiaWurtzbach We hear you’re a Final Fantasy fan! If you want to come to our big FFXV event in March, let us know!”

Wurtzbach replied in “Final Fantasy XV” language, saying that she just “died” and needs a “phoenix down,” referring to an item in the game that can revive characters when they become out cold. Their conversation went on with a few more references regarding the game, but she has not confirmed publicly if she will be attending the said event.

Meanwhile, starting Feb. 19, the official Twitter page of Square Enix that is dedicated to “Final Fantasy XV” has started introducing its developers. According to Gaming Bolt, when they introduced Environmental Artist Hiromitsu Sasaki, the artist may have hinted some information regarding the upcoming game.

The artist introduced himself as someone who likes to work on dungeons that “add beauty in scary/dark places.” He added, “I try to make the dungeons unforgettable experiences so I hope you enjoy going underground in #FFXV!” With this, he may have hinted that there will be unforgettable dungeon scenes in the upcoming game.

“Final Fantasy XV” is expected to be announced in March. Once in the shelves, the title will be available for Xbox One and PlayStation 4 consoles. For those who want to ensure that they get the first copies, the game has been available for pre-order since Jan. 26.