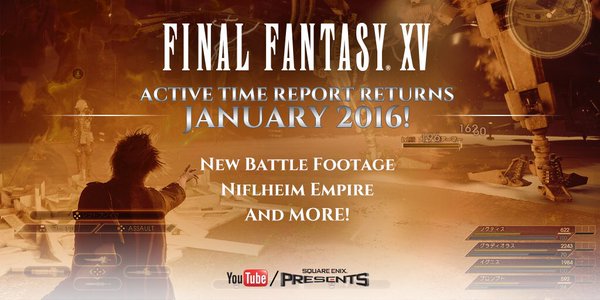 Just in time for the New Year, Square Enix will finally be sharing to fans and players new details about their upcoming and much awaited RPG game, “Final Fantasy XV.” The game company will be holding the “Final Fantasy”-centered event called “Active Time Report.”

Along with the announcement, Square Enix promised to present a new set of gameplay battle footages for “Final Fantasy XV,” a closer look at the game’s Niflheim Empire, and many morepossibly a specific release date for the game?

As for release dates, a previous report by Dual Shockers pointed out that Square Enix may be eyeing a release date for the “Final Fantasy XV” game that is simultaneous with the release of the upcoming “Persona 5” game. In an online survey done by the game company to their Japanese fans, questions varied from personal preferences, information, to finally landing on a dilemma question that seemingly hints their plan for a release date for the game.

In the 47th question of the survey spanning 50 queries, fans were asked what would they chose to buy and play should “Final Fantasy XV” and “Persona 5” release at the same time, or close to it. While it did not specify anything, fans took the question as a strong hint of what is in the mind of Square Enix. “Persona 5” has a release window of summer 2016.

As of the moment, “Final Fantasy XV” is scheduled to be released in 2016 for the PlayStation 4 and Xbox One.