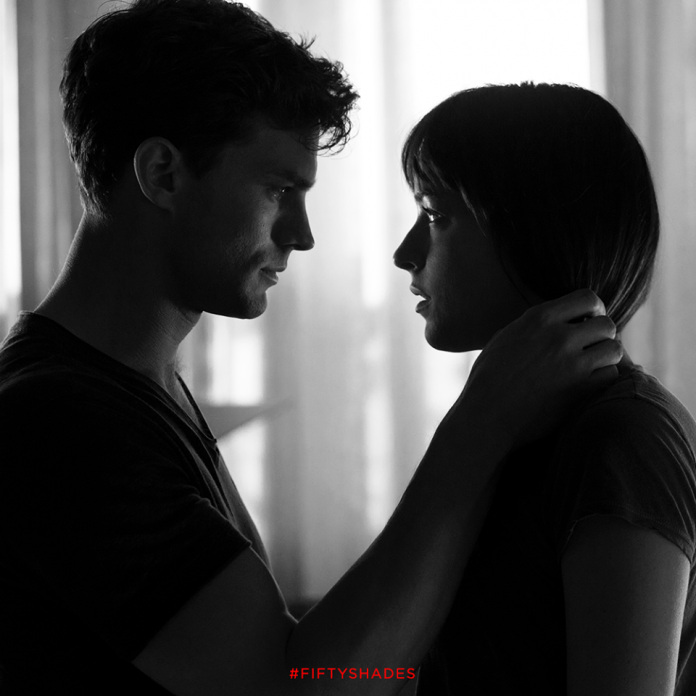 Production for the next two movies in the “Fifty Shades” movie trilogy is still very much underway. So far, photo leaks from the set suggest that the cast and crew are filming the scenes towards the end of the third novel, “Fifty Shades Freed.”

Despite heavy security, die-hard fans of the books continue to flock to filming locations in hopes of some star sightings. And since the shooting was recently done in outside locations, some snaps made their way online. The photos include that of Dakota Johnson, in her Ana character filming the bank sequence from “Freed.” Readers of the book would recognize the scenes from when Ana was being blackmailed by Jack Hyde (Eric Johnson) to give him $5 million. Things between newlyweds Ana and Christian (Jamie Dornan) have not been in a very good place at that time with the Christian feeling blindsided about Ana’s pregnancy.

It appears like the production in the past few days has been focused on the entire narrative of Hyde’s last ditch effort to kidnap Ana. A couple of weeks back, the action-packed sequence where Christian saves Ana and Mia (Rita Ora) from the perpetrator have also been captured by fans who visited the set.

So far, “Fifty Shades” loyalists have been giving out updates with regards to the development in filming especially if shootings are done outdoors. Understandably, it is only the indoor sequences that have yet to leak. However, it seems like fans will be treated to more mature content in the next two films compared to its debut iteration “Fifty Shades of Grey” as Johnson shares that she will urge Dornan to have more body exposure on camera.

Earlier this year, the actress visited Andy Cohen’s “Watch What Happens Live” to promote her movie “How to Be Single.” A fan sent a question which asked, “Dakota do you think it’s fair that we saw way less of Jamie Dornan’s body in ‘Fifty Shades of Grey’ than we saw of yours?” To which the actress gamely replied.

“Hmm… That’s an interesting question. I’ll probably get in trouble for this answer. I mean, yeah. I’m gonna make him get fully naked in the next one,” she happily answered.

Nothing is yet confirmed in terms of nudity in the film but should the movies be more loyal to their source material, novel fans can expect more than what they got in “Fifty Shades of Grey.”

“Fifty Shades Darker” and “Fifty Shades Freed” are being shot back-to-back with release dates a year apart from each other. “Darker” will come out Feb. 10, 2017, while “Freed” will hit theaters Feb. 9, 2018.