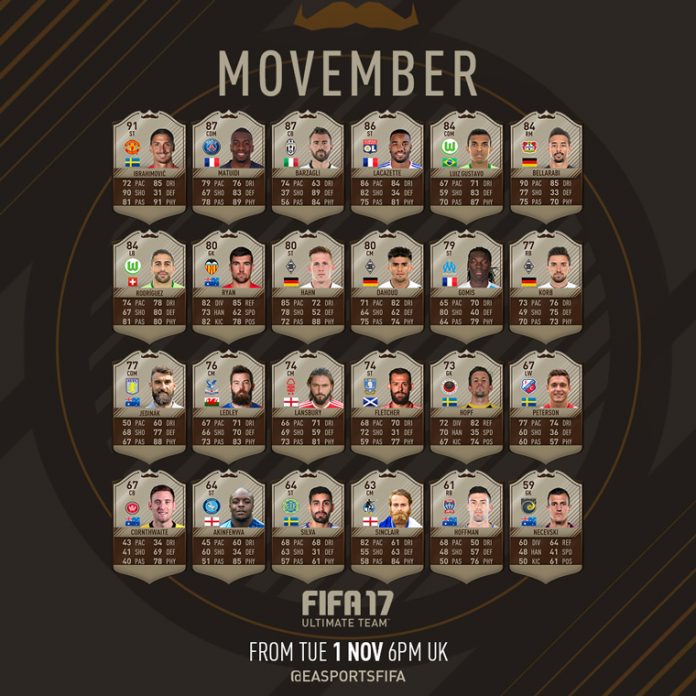 Hit game “FIFA 17” takes part in the Movember movement as it helps raise awareness for men’s health with the arrival of special cards, challenges and unique kits available for all month long.

According to reports, instead of the usual Halloween-themed items, the soccer game has chosen a different cause to celebrate this November. Players can select different styles of beards and mustaches for selected characters on different levels. These include Andrea Barzagli, Zlatan Ibrahimovic, Mile Jedinak, Joe Ledley, Blaise Matuidi and Alexandre Lacazette.

Electronic Arts Sports took to Twitter to announce the full lineup saying, “#Movember starts today! Show your [flexed biceps emoji] in #FUT and help raise awareness for mens health.” The items will be available until Nov. 30.

Aside from the different looks sported by fan-favorite characters, some of them will also have upgraded skills and stats by as much as five points. There are also Squad Building Challenges that bring awesome prizes including a Movember kit designed by FIFA community designer Emilio Sansollini.

Moreover, some of FIFA’s top YouTubers and Twitch streamers will also host charity streams. It started with Spencer FC on Nov. 4

“FIFA 17” is available across platforms such as PlayStation 4, Xbox One and PC.

'Once Upon a Time' season 6 spoilers: title, synopsis for premiere...