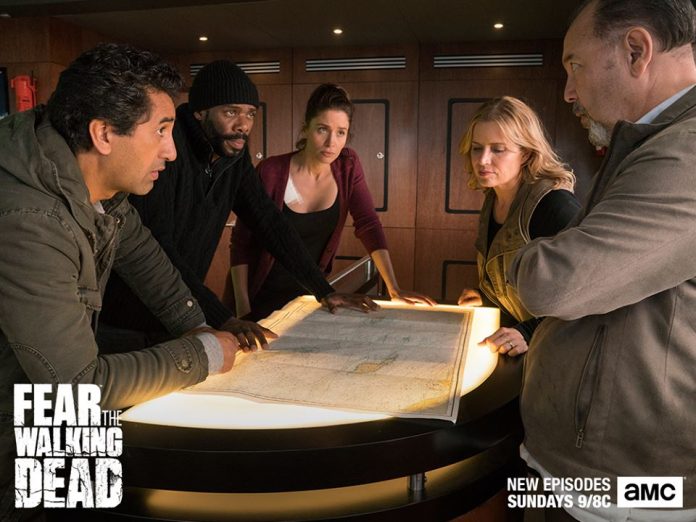 Fresh from the announcement that AMC has officially renewed its hit spinoff series “Fear the Walking Dead” for another season, the second installment continues with the characters’ adventure aboard the yacht. Viewers will get to know more about the relative show’s newcomer, the mysterious Victor Strand (Colman Domingo).

Titled “Ourboros,” synopsis for episode 3 revelas that Strand will be the highlight of the narrative as Madison (Kim Dickens) become more fed up with his secrets that seemingly put her family in more danger. She will confront him about his true intentions and plans for their group.

Viewers may remember that in the previous episode, Strand lied to the group about going to San Diego where he said that they will find a military outpost. Equipped with a weapon and satellite phone, it turned out that he was actually heading to Mexico.

Showrunner Dave Ericson teased to Entertainment Weekly, “We’re going to have a confrontation, because this information that Daniel has procured, the map that he has found, and his realization that Mexico is in their future is going to be information that he can’t keep to himself.”

“And the question of where we’re going and why we’re going there is going to become far more important, and you’ll see some head-butting between Madison and Strand,” he added.

In a sneak peek, Strand can be seen calling on his phone presumably talking to the same person he had conversed with before. However, it seems like his contact is no longer around to answer his calls as he suddenly hears a click then a static afterwards.

As he tries to explain himself, other members of their team such as Nick (Frank Dillane), Alicia (Alycia Debnam-Carey), Daniel (Ruben Blades) and Chris (Lorenzo James Henrie) will stumble upon a site of a plane crash. It is deemed that the wreckage might actually belong to the web mini-series “Fear the Walking Dead: Flight 462,” and they will meet the character of Charlie (Michelle Ang).

'Fallout 4' mods for Xbox One available next week