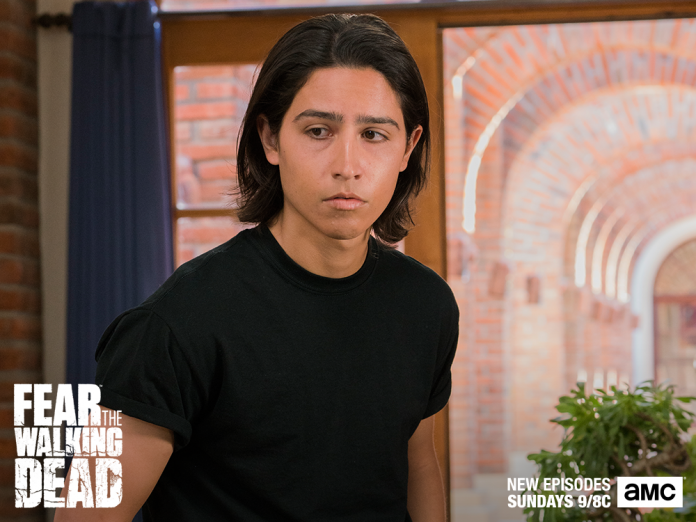 More conflicts will arise as the group nears its destination in the brand-new installment of AMC’s “Fear the Walking Dead” season 2.

Titled “Sicut Cervus,” synopsis for episode 6 reveals that Strand’s (Colman Domingo) yacht, Abigail, is almost on its way to the final stop. However, another conflict is going to erupt.

Meanwhile, Chris (Lorenzo James Henrie) will end up making a decision that will shake the family, and Nick (Frank Dillane) meets a new maternal figure.

In a promotional video, Strand tells Madison (Kim Dickens), “Luis [Arturo del Puerto] will take the zodiac over to the contact to accept payment and then we’ll be on our way to beautiful Baja.” However, it seems like they will encounter a problem with Madison asking everyone in the group to hide in the engine room. As they wait, they suddenly hear a gunshot leaving them visibly scared.

Another sneak peek showcases more of the scenes where Strand and Madison are on the deck and wondering why the former’s contact is coming towards their yacht. “What do you mean ‘they?'” Luis asks, to which Strand answers, “Which one of them? Tell me one of them is Miguel.”

When Luis pinpointed that he is the one behind the wheel but accompanied by another guy whose identity he doesn’t know, Strand instructs Madison, “Get everyone below deck. We need to hide.”

Moreover, in an exclusive clip shared by Comicbook.com, Travis (Cliff Curtis) and Chris discuss the latter’s choice to shoot Reed (Jesse McCartney) in the previous episode. Viewers may remember that Travis and Alicia were freed from Connor (Mark Kelly) and his group after a brutal exchange.

It seems like Travis will be deeply troubled by Chris’ actions in shooting someone who is not sick or a walker, “Tell me what happened,” he inquires, to which Chris replies, “I didn’t do anything, why are they so mad at me?”

“They’re saying that the guy you shot? Wasn’t sick,” Travis elaborated. Nick then asks if it’s Madison who told him that. “She’s worried about,” he further explaines. Chris then reasons out, “She said she believes me in that.”