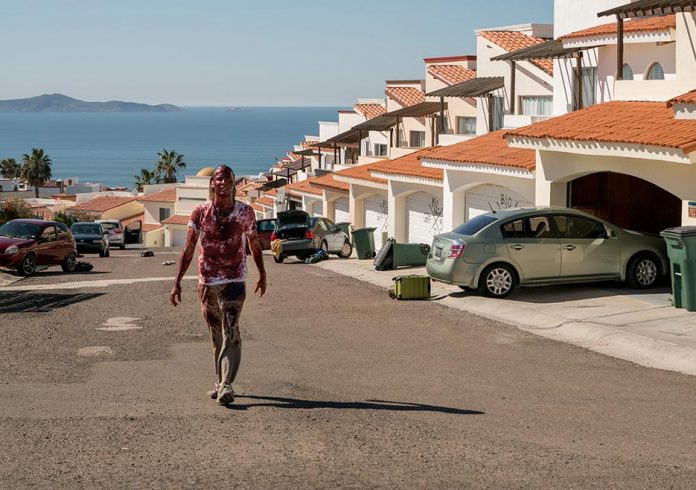 “Fear the Walking Dead” will be returning in a few weeks for the second half of season 2, and ahead of the midseason premiere, the AMC show released a new trailer which hints at danger for Nick (Frank Dillane) and everyone else.

The clip opens with Madison (Kim Dickens) telling Victor (Colman Domingo) that she’ll never see Nick again after he headed out on his own, covered in walker blood for protection.

“You leave him alone, he heads straight towards death,” says Madison. Nick is seen walking along an empty highway still covered in blood, and it appears that he is heading to Tijuana, Mexico.

The scene cuts to a Hispanic community and Luciana (Danay Garcia) looks at a man and locks him in an abandoned school bus. It appears that the people have chosen the man to be a sacrifice of sorts, as he exits the bus and walks toward a group of the infected. The people, along with Luciana, chant something in Spanish as the man is eaten by the walkers, and his horrified daughter looks on and cries.

Madison, Alicia (Alycia Debnam-Carey), and Victor are on the road and are trying to find Nick, Travis (Cliff Curtis) and Chris (Lorenzo James Henrie). Nick appears to have found shelter as a woman tells him that it is not safe to go out alone as the North Road is “full of La Manas,” described as a gang made up of “the worst of men.”

Ofelia (Mercedes Mason), Madison, Alycia and Victor think about taking shelter in a hotel, and Ofelia thinks that it could be crawling with walkers. Later, Luciana looks at a group of walkers through her binoculars, and she sees Nick stumble and fall to the ground. Nick is taken to the Hispanic community, and the doctor tells him that what he has been doing walking with the undead is foolish.

“Death is not to be feared, but it shouldn’t be pursued,” said the doctor.

The second half of “Fear the Walking Dead” season 2 premieres on Aug. 21 on AMC.