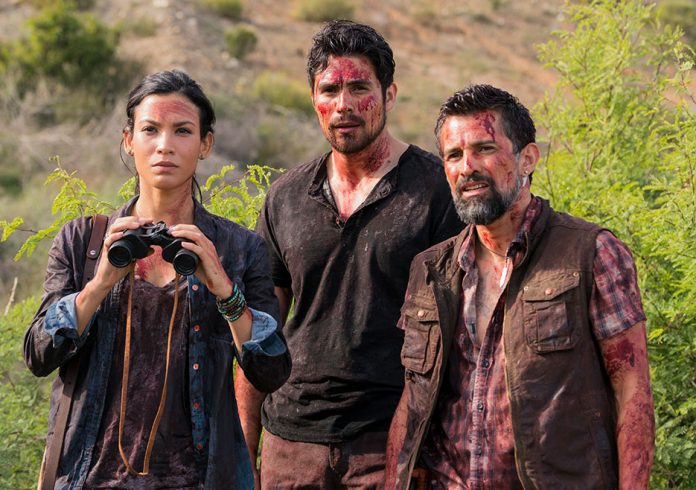 “Fear the Walking Dead” is returning for the second half of season 2 in a few days, and ahead of the midseason premiere, the AMC show released brand new images to tease the rest of the season, revealing that some new characters will be joining the series.

In the photos exclusively released to Entertainment Weekly, one snap shows Danay Garcia as Luciana, Carlos Sequra as a scout, and Alfredo Herrara as Francisco. In the photo, the three appear to be looking at something from afar, as Luciana holds a pair of binoculars. The group also appears to have used walker blood on themselves as a means of protection from the undead.

In previous episodes, Nick (Frank Dillane) found out that covering himself in walker blood masked his scent from the undead, and he was able to walk among them without being harmed. In the second half of season 2, Nick will encounter Luciana’s group after he broke away from his family and made the long walk to Tijuana on his own.

According to EW, Garcia will play a big role in the back half of season 2 as a soldier-type who brings Nick into her community a place where people have unique views when it comes to the dead.

In the latest trailer for “Fear the Walking Dead,” it can be seen that the community sacrificed one of their own men to the undead, and the man calmly approached the walkers and let himself be eaten.

The website also released some first-look photos at the other cast members, with Madison (Kim Dickens) and Victor (Colman Domingo) at an abandoned hotel bar, while Travis (Cliff Curtis) and Chris (Lorenzo James Henrie) are out in the open and are walking along a dusty road. Meanwhile, Alicia (Alycia Debnam-Carey) appears to have found a change of clothes in the hotel where she, Victor and Madison are hiding out.

The back half of season 2 of “Fear the Walking Dead” premieres on Aug. 21 on AMC.

The Last Man on Earth season 2 news: Phil and Carol...