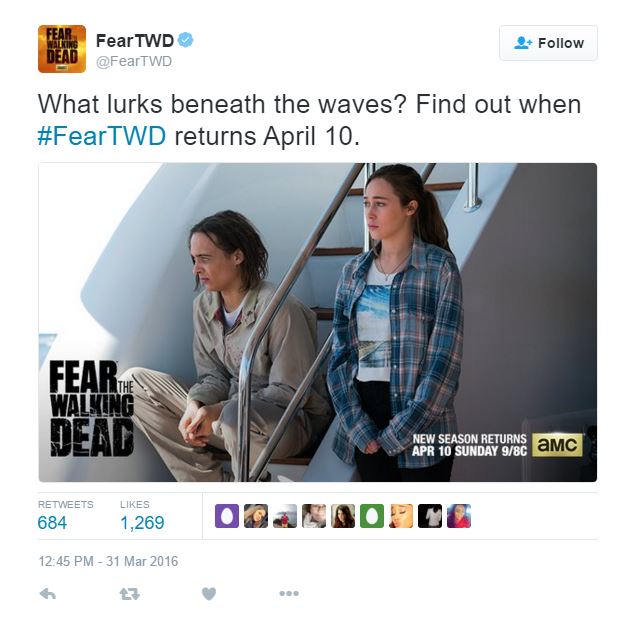 As season 6 of “The Walking Dead” is about to air its season finale, fans have shifted their focus on its sister show, “Fear the Walking Dead” season 2, which will premiere in just a little more than a week.

On its official Twitter page, the American horror and drama prequel teased fans, “What lurks beneath the waves? Find out when #FearTWD returns April 10,” along with a photo of Alicia (Alycia Debnam-Carey) and Travis (Cliff Curtis) looking uncertain, while they are aboard the yacht.

The exclusive photos that TV Guide was able to get show the survivors looking over the Pacific Ocean. In two of the photos, Victor Strand (Colman Domingo) is seen holding a rifle. Will dangers immediately lurk in the first episode?

Meanwhile, the same social media page of the television series also conducted a poll about the preparedness of Strand. Back in season 1, he told the survivors that he knew how to overcome the zombies and asked them to board his yacht named Abigail. With this, the survival of the rest is on his shoulders.

Regardless of the general consensus, fans will still have to wait for a few more days to find out what will happen when season 2 of “Fear the Walking Dead” premieres on April 10 on AMC.