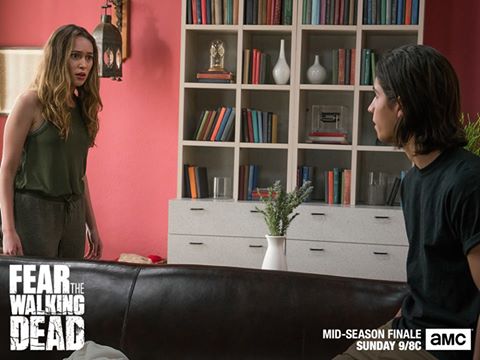 The upcoming episode of hit AMC series “Fear The Walking Dead” is expected to show more chaos brewing inside the group.

Titled “Sicut Cervus,” the previous episode of the series saw the group getting settled in Strand’s place in Mexico. Fans saw Strand, played by Colman Domingo, spending time with his ill lover Thomas Abigail, played by Dougray Scott. Since Thomas was very sick, Strand told him that he was willing to poison himself so that they may die in peace together.

However, the final moments of the episode saw Strand shooting Thomas instead. With that, fans can expect the upcoming episode of the season titled “Shiva,” to begin right where the story left off.

The teaser for “Shiva” shows the group frantic after hearing Strand’s gunshot. Cliff Curtis’ character, Travis, will look for Chris, played by Lorenzo James Henrie, who was last seen fleeing the house after Madison, played by Kim Dickens, and Alicia, played by Alycia Debnam-Carey, found him standing over them with a knife.

It was teased that the mid-season finale of “Fear The Walking Dead” will present a big challenge to the group. The executive producer of the series, Dave Erickson, explained that the group’s biggest obstacle will be staying together despite the many factors that are pulling them apart.

According to Entertainment Weekly, he said, “It’s going to be big. There are actually some very significant movements that’ll play out. Everything that we’ve been laying track for, a good deal of it will be paid off. As we ended this episode, we saw Chris race outside, and there’s a very good question as to where he’s going to and what Travis is going to do to bring him back.”

With that, the midseason finale of “Fear The Walking Dead” will surely bring an interesting storyline when it airs this Sunday, May 22 on AMC at 9 p.m. EDT.