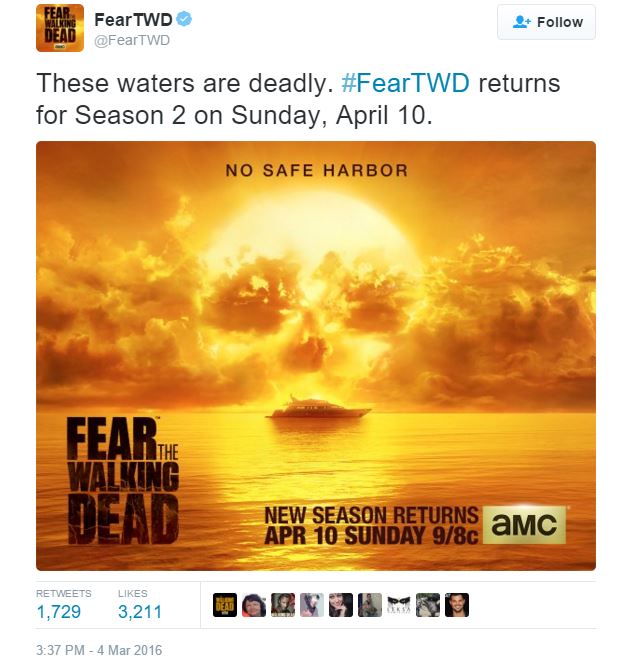 Season 6 of “The Walking Dead” has just concluded last Sunday with a major cliffhanger, and fans need to wait for a few more months before they find out its continuation. Nonetheless, fans will get their dose of its spinoff show as season 2 of “Fear the Walking Dead” will premiere next Sunday.

The show’s official Twitter page continues to hype up the fans by posting several photos, clips, and teaser messages, mostly about the dangers looming ahead of the survivors in the upcoming season. It also encourages fans to watch the first season once again to refresh their memories before the sophomore run returns to the small screen.

In one of the exclusive sneak peeks from Yahoo, it initially shows the survivors getting on board the yacht as they look for a sanctuary. The tension was clearly there, as even the survivors are setting the boundaries clear and even threatening each other. The preview also shows some arguments and misunderstanding among each of them.

The same general feeling is continually highlighted, as a day after, a new post on the show’s Twitter of a sneak peek is captioned, “Can anyone be trusted? Find out when #FearTWD returns April 10.”

Showrunner Dave Erickson already warned fans that there will be a lot of disagreements as the characters try to protect themselves.

He explained, “And much in the same way that we have taken steps to survive and compromised our morals to do so, we’re going to have to deal with some people who have very similar objectives, and the default setting for most of these people is not going to be, let’s all live in harmony and try to build a new community,” noted Entertainment Weekly.