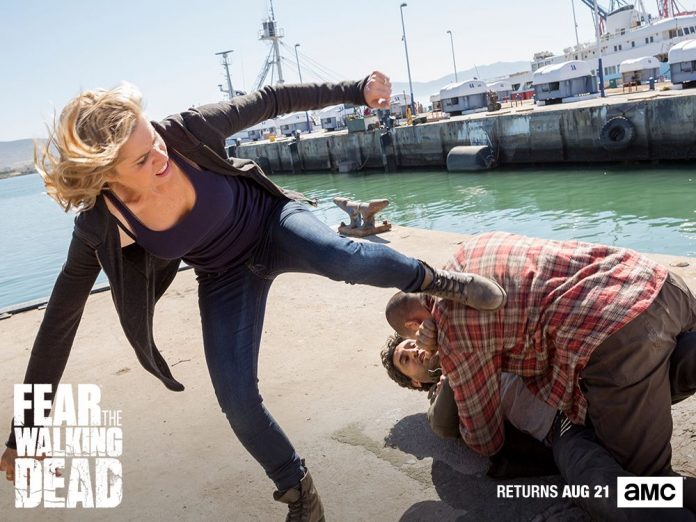 When AMC’s post-apocalyptic drama “Fear the Walking Dead” returns for the second half of season 2, the survivors will continue on their separate journeys after deciding to split up before the midseason break.

In the finale “Shiva,” Nick (Frank Dillane) walked into a horde of zombies unarmed and without any protection. Although Madison (Kim Dickens) seemed to have lost it when she saw her son being risky, it appears that the teen only did one of his deceptive tricks. Due to observing the walkers for long, Nick found out how to blend in with them undetected.

According to Undead Walking, Nick’s unstable state of mind will only be temporary and he will soon come back to reality. He will also return to his mother as it is deemed crucial to stick around people whom he can trust as they find another safe place in the difficult world they live in.

There are also speculations that Nick being among the undead may do him good. The character has been battling addiction for quite some time and his zombie charade is said to be a potential learning process for him as he will be faced with a life and death situation. However, it remains to be seen whether it could be a form of rehabilitation for him or actually leads to his demise.

Meanwhile, Cliff Curtis who portrays Travis explained to IBTimes UK the reason why he left the others behind. He shared that he will try to find the whereabouts of his son, Chris (Lorenzo James Henrie), on his own.

“His son is his primary concern now, and that’s going to be a problem for their relationship and his relationship with the kids,” the actor said.

More information about the show is expected to be revealed during its appearance at this year’s San Diego Comic-Con.

Legends of Tomorrow spoilers: Hawkman to guest in Arrow, The Flash...