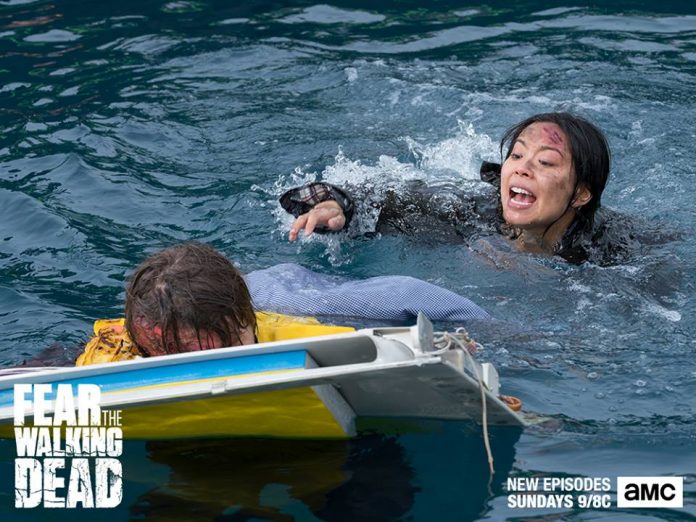 The most recent episode of “Fear The Walking Dead,” titled “Captive” showed the return of Alex, played by Michelle Ang. The character was last seen stranded in the middle of the ocean when Strand, played by Colman Domingo, cut the rope that tied her lifeboat to the yacht.

In “Captive,” Alex was seen onboard Connor’s boat as she tormented Travis, played by Cliff Curtis. She voiced her resentment for Travis’ choice to leave her behind, explaining that she is the reason why he was captured by Connor’s men.

The executive producer of the series, Dave Erickson, spoke to Entertainment Weekly about the role she will play in shaking Travis’ morale. He said, “She gets a chance to size him up, and she realizes how difficult a decision that was for him. She realizes that he suffers for it. It pains him. And I think for her, she sees an opportunity to save him if that makes any sense.”

He went on to explain that Alex is determined to teach Travis a lesson about his decisions. In addition, she hopes that he will understand her part of the story and is curious to know what Travis will do about it.

In a previous interview, Ang was able to share some hints about what the future holds for her character. She explained that if Alex becomes part of the group, she will also be challenged when dealing with Strand.

According to Digital Spy, she said, “I don’t think [s]he’s going to forget what Strand did we’ve seen her act fiercely towards people who aren’t in alignment with her, or who aren’t willing to protect what she wants to protect. But she is also a survivor and Strand has a lot of resources, so it’ll be interesting to see whether diplomacy is in order to get to those resources.”