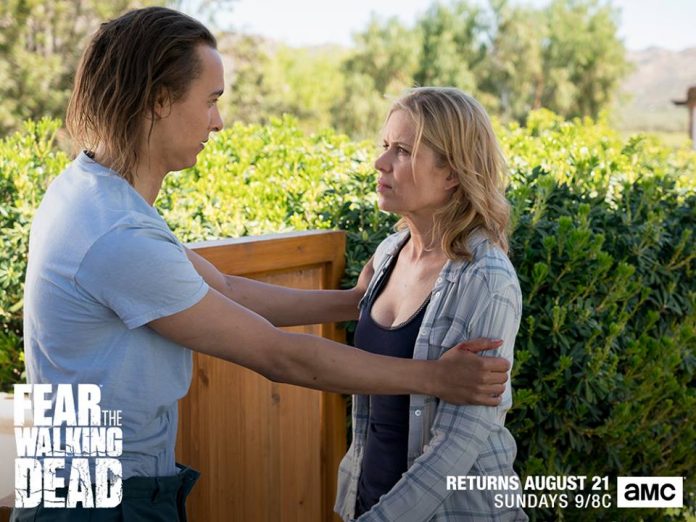 “Fear the Walking Dead” debuted the latter half of season 2 with Nick (Frank Dillane) in the spotlight. But come episode 9, fans will finally have their reunion with Madison (Kim Dickens), Strand (Colman Domingo), Alicia (Alycia Debnam-Carey) and Ofelia (Mercedes Mason).

The next installment of the apocalyptic show titled “Los Muertos” will leave Madison and the rest with no choice but to move forward after the compound they are currently taking refuge in collapses. Despite being separated from son Nick, Madison will still be worried about him that Alicia will need to remind her of the situation. The promo clip for the episode suggests that they will end up in an abandoned hotel. Unfortunately, it appears that the establishment is not exactly deserted.

Elsewhere, Nick will soon be back on the streets after he is handpicked for a dangerous mission. The trailer shows the former drug addict with newbie Luciana (Danay Garcia) visiting a gang.

Meanwhile, “Fear the Walking Dead” showrunner Dave Erickson revealed that the happy moment during the end of the last episode would probably be the last given that gorier things are to come.

“This is one of the most joyful moments on the show, and it’s probably going to be the last. Look, in some respects that’s a moment of that’s the reward for the journey, and what he’s found is a group who much in the same vein as Celia [Marlene Forte], they do not see the dead as monsters,” Erickson explained to Entertainment Weekly during an exclusive interview. “They embrace the apocalypse and they see it as more of an evolution. It’s not apocalypse for them. We’ll get into their belief system in the sense of the religious aspect of it as we move forward, but yeah, for that particular moment it is exactly what Nick was hoping to find, and yes, ultimately nothing ends well in ‘Fear’ or in ‘The Walking Dead.’ So it’s a taste of joy before the fall.”