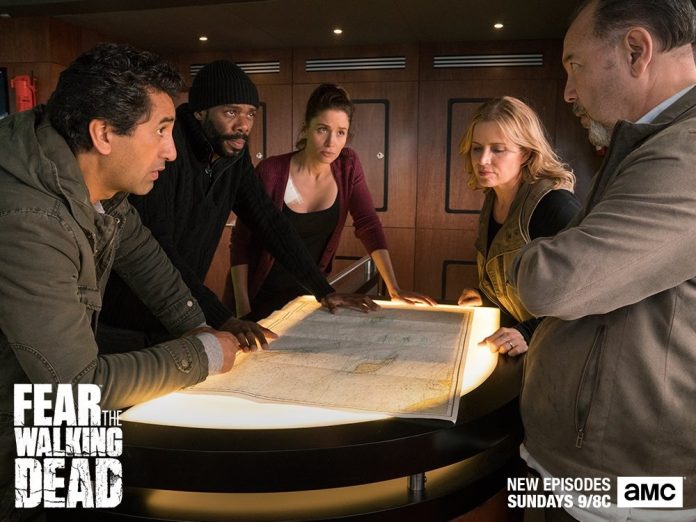 Episode 3 of “Fear the Walking Dead” saw the group of survivors heading towards Mexico, which Strand (Colman Domingo) claims has a self-sustaining compound that can keep them safe from the epidemic. Strand continues to be a mystery both to the rest of the characters and to the audience, but episode 4 will see the billionaire’s past slowly being uncovered. The next episode will provide additional insights about Strand and his motivations.

The synopsis posted by AMC for “Fear the Walking Dead” season 2 episode 4 reads, “A family in distress boards the Abigail; and Strand branches off as his past begins to emerge. Meanwhile, Nick searches for an associate of Strand’s.”

Meanwhile, Nick is looking for an associate of Strand who can give valuable information on whether the billionaire can be trusted. Travis, on the other hand, is certain that Strand is up to no good telling Madison straight on that they can’t trust the guy. As much as the crew wants to get rid of Strand, Daniel believes that he could still be of use. The promo video teases the audience that chaos will arise in the next episode especially when the people they let aboard Abigail seem to have plans on taking over the yacht.

Last Sunday’s episode saw Nick learning how to get away from zombie attacks. While trying to get away from the infected, Nick ended up being covered with zombie blood and insides which made him invisible to the undead.

Showrunner Dave Erickson said in an interview with Entertainment Weekly, “I think it’s something as a tool that [has] used a few times in the comic and on the original show ‘The Walking Dead,’ and it’s tool that I think we’ll see our characters, specifically Nick, use again now that he knows that it’s sort of a zombie-free pass.”

'The Affair' season 3 news: Helen, Noah to rekindle their relationship?...