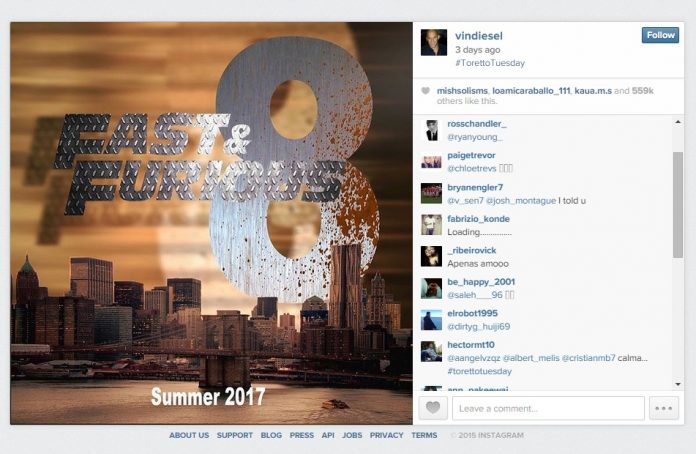 Prepare to gear up and fasten those seatbelts as hit movie series franchise Fast and Furious gets its eight movie with “Fast & Furious 8”. As early as now, the movie is already set to hit theaters on April 14, 2017.

Latin Post reported that actor Vin Diesel recently revealed the filming location for the upcoming movie. Just like what was previously hinted, Diesel confirmed that Furious 8 filming would be in New York. The 47-year old actor revealed the information through his Instagram post last Tuesday, uploading a photo of a seemingly prototype of a movie poster for Fast and Furious 8 with the Brooklyn Bridge on the background.

Previous reports also claim of rumors about the film to also partly shoot in the Philippines, particularly in Epifanio de lo Santos Avenue or EDSA, the busiest highway in the country. No official news regarding this as of the moment.

Familiar actors return for the film, as well as new characters, and rumors of new cast. Actor Kurt Russell returns to reprise his role as Mr. Nobody in the recent Furious 7.

“I always think of these films in multiple pictures in advance,” Diesel previously said. “Kurt Russell came in for this movie but we really hired him for a story that follows this, that takes place in New York.”

Dwayne “The Rock” Johnson also confirmed that he would be reprising his role for the movie, as he told Collider that the movie “can’t go on without Hobbs”.

Also,Jason Statham, the actor who plays Deckard Shaw, teased on the return of his villainous character. “I’d certainly come back for the next one,” Statham said through MTV News. Statham adds that his Spy co-star Melissa McCarthy could play the character of Shaw’s sister.

Cody Walker, brother of the late Paul Walker, is also rumoured to be joining the cast as a new character. Cody previously joined Furious 7 as a double for his late brother Paul, to be able in incorporate the remaining scenes of the late actor that is not yet filmed.

'Daredevil' season 3 release date, plot spoilers: Bullseye as the next...