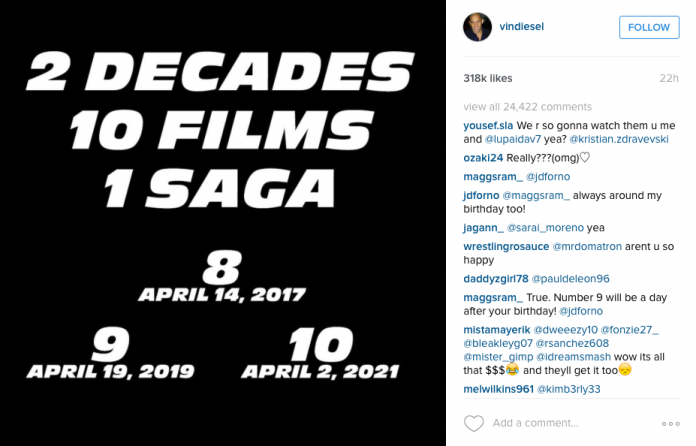 More information about the widely successful film franchise “Fast and Furious” has been revealed courtesy of one of its cast members.

Lead star Vin Diesel, who plays Dominic Toretto, took to Instagram to share to fans the good news about the upcoming “Fast and Furious 8” movie. He posted a photo showing the confirmed release date to be on April 14, 2017, while revealing that there will be a trilogy.

“Straight Outta Compton” director Gary Gray is taking the helm as the director of the highly anticipated sequel. He previously announced his participation in the film on his Facebook and Twitter pages saying, “Could not have asked for better partners than Vin Diesel, Neal H. Moritz, & the Universal Studios Entertainment family. Together we are excited to bring you the next chapter in the Fast & Furious saga. #FastFamily.”

Diesel also welcomed the new director to their team as he posted a picture of them with a collage of the past “Fast and Furious” films on the background.

Meanwhile, Michelle Rodriguez, who plays Letty, shared to E! News before that the new film has been inspired by the late actor Paul Walker even though he sadly will not be part of it, “We need a good reason to move on after Paul. And being that this is a global franchise now, it’s not just the American baby, it’s important that we consider moving on and take it seriously.”

“But for us as a cast, I think we need a reason and it needs to have heart, so hopefully we’ll find it, you know? And somebody who’s passionate about directing itI think that’s the most important thing is finding a good director,” she added.

Jeremy Lin is a free agent will he return to...