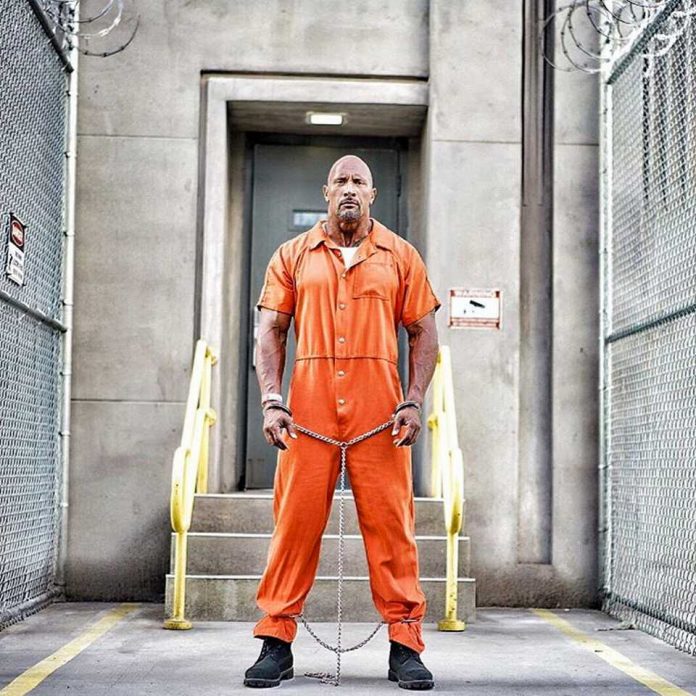 Production for the eighth installment of “The Fast and Furious” series is ongoing. And while the franchise mostly focuses on the squad of Vin Diesel’s Dominic Toretto, it appears that a spotlight shift is coming based on the many updates by Dwayne Johnson.

The former professional wrestler plays Luke Hobbs, who first came into blows with the rogue car enthusiasts back in “Fast 5” when he thought they had something to do with the death of some DEA agents. However, as the story progressed, his relationship with the group became friendlier. By the latest iteration of the series, they were all together in one team, albeit technically not in an official capacity.

With Hobbs being a Goody Two-shoes in the past two flicks, it seems like things will take an unusual turn with Johnson posting a couple of images of himself on set wearing a prison uniform. The latest from The Rock’s social media is an Instagram photo of himself still with the orange suit but this time inside the penitentiary. The photo was accompanied by a lengthy caption.

“A man who lives by a code of ethics, but who will also rip your throat out and give it back to you just so you can apologize for pissin’ him off,” the actor wrote. “Let Toretto and his friends preach family and love… Not HOBBS. The Iceman cometh. And he don’t f–keth around.”

Of course, the reason why the government official is suddenly behind bars is still being kept tightly under wraps. It could also possibly be a flashback of some sort. While Hobbs has already been in the series for two movies now, not much is known about his backstory. Regardless, fans can expect that it will play a pivotal role in propelling the narrative of the film moving forward.

The director of “Fast 8,” F. Gary Gray, also took to his Instagram to update fans on the highly mysterious prison scenes. In a short video, Johnson, who is accompanied by Gray, says, “Okay, so here we are in a jail scene on the set of ‘Fast and Furious 8.’ Here’s the thing, in the history of cinema, there have been jail scenes, prison scenes. [But] this is the prison scene of all prison scenes. And we are kicking f–king ass.”