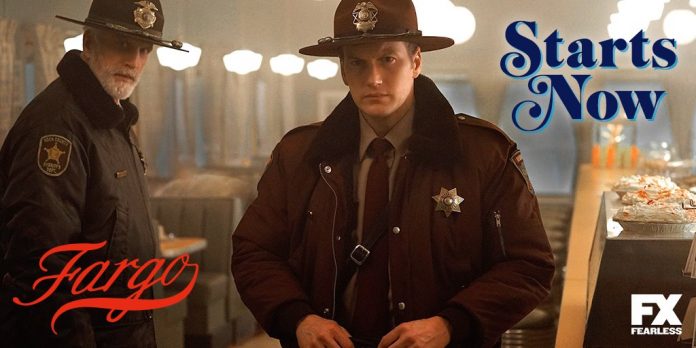 The premiere episode for the highly anticipated second season of “Fargo” is currently rolling out with a star-studded cast that sets the tone for an interesting new take on the critically-acclaimed FX’s anthology series that is set in 1979.

Kirsten Dunst plays a Midwestern beautician named Peggy who leads her husband Ed, portrayed by Jesse Plemons, to make a mistake that may become the overarching mystery in the storyline.

Describing themselves as an “uncool Bonnie and Clyde,” Dunst teased to E! Online that, “Peggy does something very dumb and very bad and then she tries to cover it up like nothing ever happened. So you slowly realize there’s a sociopathic streak in her to be able to do something like that.”

Investigating the crime is Patrick Wilson as the young Lou Solverson. As introduced in season one, the Sioux Falls murder that will be tackled in the current installment is one of the pivotal cases in the detective’s career.

After he gets back from the Vietnam War, his character will be dealing with chasing the bad guys at the same time as trying to keep innocent people out of harm’s way, “You’ve got bad guys, you’ve got really bad guys and you’ve got your super-villains, and you’re just trying to keep everybody at bay and solve this crime and that’s a lot of what Lou’s trying to do throughout this,” Wilson shared.

Meanwhile, executive producer Warren Littlefield told The Huffington Post that even though the format delves into a completely different plot from the freshman run, paying homage to Keith Carradine’s portrayal of the modern-day Solverson is “a connectivity to the original” which he calls “a work of art.” He also mentioned that viewers do not necessarily have to watch season one to understand the whole story.

The setting in 70’s Littlefield hints that they will show the changes happening in America amidst international and economic chaos, “So there’s this kind of salve, this presence that rises in the West and comes to the Midwest. We try and capture both of those: the world as it was then and what’s coming,” he said.