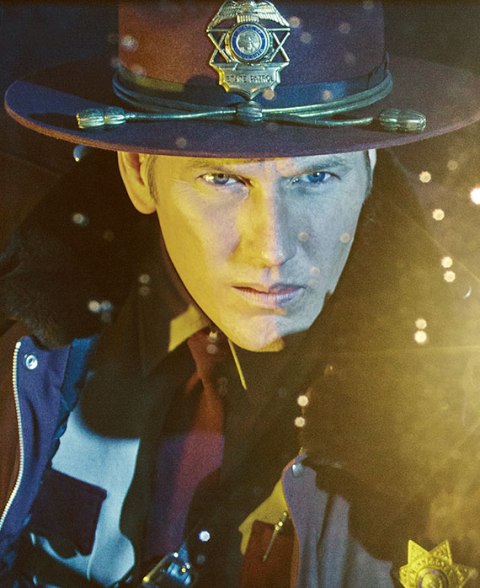 In October, the latest season of the TV series “Fargo” will premiere and as anticipation builds, FX has released some new stills from the next season with a serious looking Patrick Wilson as Lou Solverson.

The photos point to more crime and intrigue as he shines a flashlight into a car with a serious look on his face.

A much older looking Ted Danson is shown in his cop uniform also peering suspiciously into a car.

In an interview with Entertainment Weekly, Wilson said, “There are so many characters, so many woven storylines. And watching it reference different Coen brothers movies, and I’m sort of maybe a little bit Tommy Lee Jones in ‘No Country,’ sort of trying to get all these factions of criminal together, solve this crime it was absolutely unbelievable.”

During the 2015 Summer TCA press tour for the show, Plemons said that he gained a lot of weight and changed his hairstyle to suit the role of the Minnesotan butcher. Likewise, Dunst chose a different style for her role as a small-town beautician.

Meanwhile, on their website, FX has released the official synopsis for the show. “Fargo” Season 2 will be set in 1979 in Sioux Falls, South Dakota and Luverne, Minnesota. The story will center on State Police Officer Lou Solverson as he investigates a case which involves a major mob syndicate, a local crime gang, and a beautician named Peggy Blumquist. The crime was referenced in the first season of Fargo by an older Solverson played by Keith Carradine.

Based on the Coen brother’s film of the same title, creator Noah Hawley mentioned that the upcoming season is also influenced by “Miller’s Crossing” and “The Man Who Wasn’t There.” Not only will it be a comedy, the show will also be a mystery and a drama.