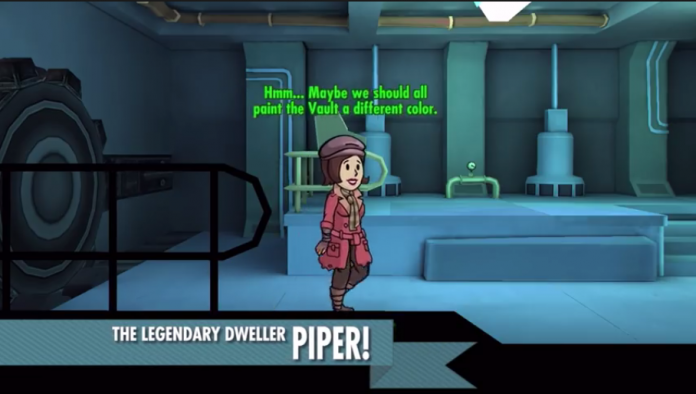 The latest update for the hit game, “Fallout Shelter” now allows users to save their Vault on a cloud which means that they can easily access their progress using different devices.

Aside from the aforementioned feature, update 1.2 also brings in a mysterious stranger, survival mode, lootable enemies and a new legendary dweller named Piper, a character from the upcoming “Fallout 4.” It also gives a direct start to the game, without having to go through the time-consuming tutorial especially for those who only want to start again but already have the knowledge of the basic controls.

According to some gamers, the mysterious stranger sometimes appears accompanied by music. When he is spotted and tapped on time, he gives out cap rewards that range from 300-2000 caps.

Meanwhile the survival element requires having a new vault before players get to choose which mode they want to try. The added challenges for the Overseer reportedly include making use of the resources faster, there is more damage caused by accidents and dead dwellers cannot be revived. It is advised that people who have grown some attachments to the dwellers avoid the mode. The Overseer can also loot from the dead raiders for their equipment.

Moreover, the inclusion of Piper will only become available for iOS through the App Store. Her statistics in the special area includes: four for Strength, Perception, Agility and Luck; nine for Endurance, six for Charisma, seven for Intelligence. She also comes with Piper’s outfit which is equipped with stats of Perception +2, Endurance +2, Agility +2 and Luck +2.

There will also be free five lunchboxes given as a gift by the Vault but Android users will not be able to avail of the exclusive feature.

A new tab on the Vault Dwellers Survival Guide also lists some useful statistics for easy viewing such as SPECIALs levels, number of males and females and power production.

Lastly, the number of explorers in the Wasteland has been limited to the maximum 10 instead of the unlimited amount previously.