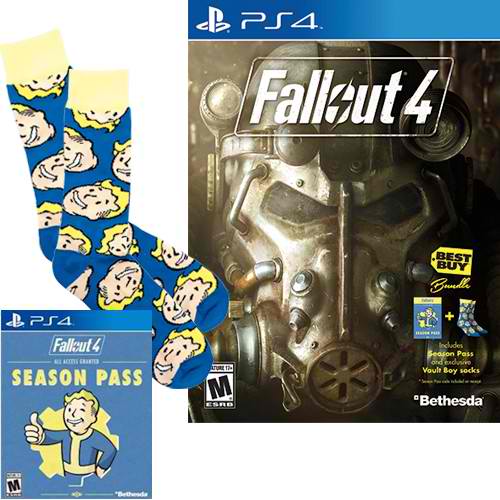 The Fallout4 Gold Edition Bundle is coming with… a pair of socks.

As a pre-order exclusive from retailer Best Buy, the Fallout 4 Gold Edition Bundle comes with an exclusive pair of socks with the pattern design of Vault Boy, the official mascot of the game’s Vault Tec Corporation.

The Gold Edition Bundle also includes, along with the main game, a Fallout 4 Season Pass. The Season Pass entitles the owner to free DLC updates everytime they become available, whereas non-holders of the Season Pass will have to buy each DLC pack at their corresponding prices.

While the Season Pass is now up for purchase, Bethesda has not yet announced any concrete DLC plans for the game.

The Fallout 4 Gold Edition Bundle is available for the PS4 and the Xbox One editions of the games, and can be pre-ordered for $84.99 per package.

A week long sale centered on Fallout 4 merchandise is also ongoing over the Bethesda Store, and will last through October 26. Items up for grabs include the Ultimate Dweller’s Survival Guide Bundle, Fallout Anthology, a Vault 111 Hoodie, a Garage Litograph, The Art of Fallout 4 hardcover art book, and a limited offer of a free Great War 2015 shirt for every pre-order of the game via Bethesda’s online store.

As for the PC version of the game, Bethesda had detailed minimum and recommended system specs for running the game.

Fallout 4 will be available on November 10th for the PS4, the Xbox One, and PC. Every physical pre-order copy will come with the Fallout 4 Perk poster for free.